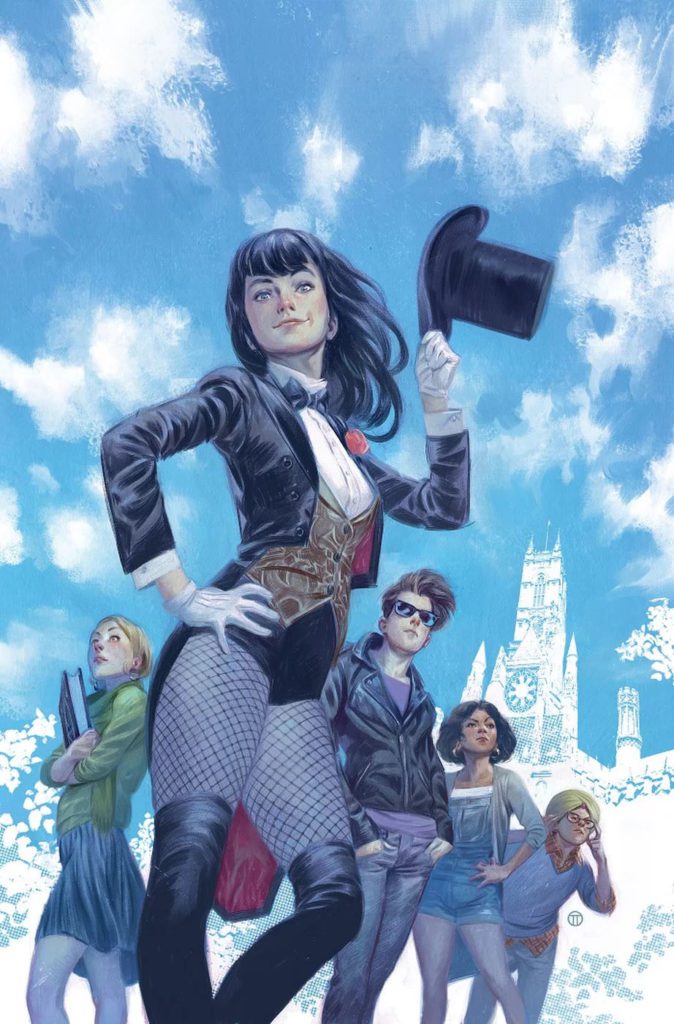 What do you get when you take a group of teenagers with unique powers and set them in a school to learn how to control it better? You get the X-Me…..I mean Mystik U. Sorry for the dumb joke. Mystik U though is essentially like Harry Potter and the X-Men school setting. I don’t know why, but it never came across to me to have a book about Zatanna learning her powers. I had always assumed she learned her spells from her father Zatara but this is a setting that can obviously work so well that there is no reason for DC to not give it a go.

The book starts you off in a setting where a battle has taken place and it is a bit daunting at first mainly for when they introduce a character named Rose that we learn a little bit more about later in the issue. The book wastes no time explaining that Zatanna seems to start manifesting her real magic abilities and after a trick gone terribly wrong. She is quickly sent off to Mystic U to begin her training. If you are a fan of fantasies than you’ll enjoy the nice splash page of when Zatanna steps onto the campus and you see many things that are typical in fantasy stories such as fairies and a dragon. Like in any other typical teenage setting, we also see Zatanna meet 4 other students and start to become friends with them, each with their own unique abilities. One of which is Enchantress which some may know from series such as the Suicide Squad. One student, in particular, seems to be the Scott Summers for the group. The resemblance is uncanny with the leather jacket, long brown hair, and even his own signature purple sunglasses that he can never remove for the safety of everyone around him. Oh, they also make him a bit of a jerk because you know. Everyone likes to poke at Cyclops being a jerk in the X-Men universe. Enough of that now though as we learn about what the students can do, a couple find out about how one of the new students will become a malevolent force against the school which probably is where this arc really begins. We are even given a slimy monster that seems to be picking off students causing a scare for all of the students and faculty.

With nearly 50 pages the book starts off well enough to give us our setting, group of characters and an end goal of what we are to expect. The groundwork is complete for this series to only continue to build on itself for what can be a fun fantasy adventure for Zatanna and her new friends.

alisa kwitney DC comics mike norton mystic u
Are you an Insider?News, reviews, & updates are just the beginning.