Writer-director Neill Blomkamp has been recently posting some previously unseen Alien 5 (possible working title Red Harvest) concept art on his social media accounts from his now dead Ellen Ripley revival. This inspired us to seek some information on the project and we’ve discovered that Fox had indeed planned on moving the film into pre-production. 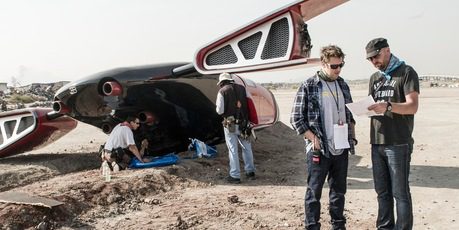 We’ve learned that New Zealand production designer Philip Ivey (6 Days) was attached at one time to reunite with Neill Blomkamp on the abandoned film. Philip and Neill had a previous working relationship pairing on District 9 and Elysium. Say what you will about Elysium, it’s still one of the better-designed films of that year.

In May 2015, we caught wind that Alien 5 was eyeing Vancouver, British Columbia, Canada for production shoot that fall. Our own new information reaffirms this and adds that Johannesburg, South Africa was also being looked at. The latter was likely chosen to keep production costs down on the project as District 9 and Chappie were shot there.

Blomkamp has since made British Columbia his home base for his production company Oats Studios, where it has been grinding out some excellent short films over the last little while. Shane Black’s The Predator would eventually shoot in Vancouver as well.

It’s interesting that Alien 5 got this far only to get canceled and only fuels talk that Ridley might have had a hand in its demise. Scott is rumored to be behind the axing of Blomkamp’s film to help make his Prometheus sequels the priority.

There is some evidence that Ridley (a producer on Alien 5) might have lifted script elements leading to a handful of Alien 5 script revisions along with Blomkamp’s concept art seemingly making its way into Covenant. Here is an example by concept artist Callum Alexander Watt‘s (Alien: Isolation) character design from Alien 5 (created in 2015) that eerily looks like Katherine Waterston’s lead character Daniels from Alien: Covenant (began filming on April 4th, 2016).

Have you seen this:
EXCLUSIVE: HBO's The Last Of Us Character Descriptions

Neither has stated there was tension behind the scenes and seem to be very respectful, despite Scott lying about Alien 5 not having a script. This was refuted by both James Cameron and Sigourney Weaver back in July 2016 at San Diego Comic-Con.

CAMERON: “I think it works gangbusters. He shared it with me, and I think it’s a very strong script and he could go make it tomorrow,” Cameron stated. “I don’t know anything about the production, and I don’t know what Ridley [Scott]’s doing. But hopefully, there’ll be room for both of them. Like parallel universes.”

WEAVER: “There is an incredible script by Neill. I didn’t want to do a fifth one. I thought going to earth wouldn’t be fun. I got this script that was amazing and gives fans everything they’re looking for and innovates in ways that became part of the world for me. He has things to do and I have things to do. And I hope that we’ll circle back around to do it once those things are done.”

However, if Ridley Scott’s recent comments to Vulture concerning inexperienced directors tackling Star Wars (has also alluded Alien is on the level of Star Wars) is any indication he might have had issues with Blomkamp’s level of experience and the fact at one time Alien 5 was his baby.

“When you get a guy who’s done a low-budget movie and you suddenly give him $180 million, it makes no sense whatsoever. It’s fuckin’ stupid. You know what the reshoots cost?”

Ridley and Jim once pitched to Fox a version of Alien 5 with Weaver’s Ripley that was rejected for Alien vs. Predator instead helmed by newcomer Paul W. Anderson.Those old wounds might run deep.

The Alien franchise is in an odd place at the moment. Due to Alien: Covenant‘s weak box office turnout there had been a bit of question if Fox was going to move forward with Alien: Awakening which we reported had been at one time expected for production in Summer 2018. Despite recent comments from Fox’s Stacey Snider via THR suggesting Ridley is working on the next one, they haven’t announced officially they are moving forward with it.

Ridley Scott has stated to the TorontoSun that the studio would be “crazy” to not let him continue to make Alien films for them, but who knows if they’ll actually let him.

“I would like to; they’re crazy if they don’t. David is a fantastic villain. I love what (Michael Fassbender) did in Covenant. But it’s f—ing hard, dude. We lifted Alien out of a ditch and made Prometheus.”

Disney’s recent merger with Fox could see the studio take a renewed interest in making more Alien films on a regular basis opening the door for multiple projects within the Alien universe to be developed. We do expect a reevaluation of the Alien franchise could be coming. What that means is currently unknown as it remains to be seen if Fox will pursue more Ridley Scott films or move towards other options.