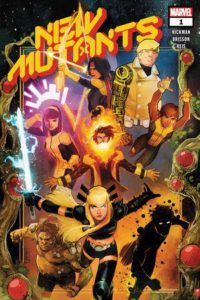 In the latest spinoff from the House of X series is the relaunch of the New Mutants title. This time the team is comprised of Karma, Wolfsbane, Mondo, Cypher, Mirage, Sunspot, Chamber, and Magik. The title doesn’t waste any time and Hickman throws the reader right into some heady content right off the bat…

… By showing the resurrection of Wolfsbane. She’s met by Prof. X and Storm who welcome her back to the land of the living. In just a few pages the characters walk us through the history of mutants, the establishment of the mutant nation of Krakoa, and then we get launched into a meet-cute for the current roster…a few pages later the group of New Mutants are traveling through space with the infamous Starjammers.

Yep, after about a dozen pages of the characters meeting and this new title starting, we are introduced to MUTANTS…IN…SPAAAAACCCCEEEE!

Sorry, I had to do it. This whole series of events is kicked off by Sunspot missing his man-crush/best friend and fellow founding member of the original New Mutants, Cannonball and since Cannonball is not on the planet, but living in space after the far too complex and confusing storyline that was started in U.S.Avengers, the New Mutants teleport aboard the Starjammers ship and the adventure into Shi’ar space begins.

The two teams clash and the issue ends with the New Mutants being captured by the Shi’ar and the Starjammers flying off to leave the teens to their fate. But don’t worry, Sunspot says he knows a good space lawyer.

Hickman has been so meticulous ad careful in laying out the groundwork for the uber-successful X-Men relaunch, that this title comes off as his chance to blow off some steam. This one is just for fun. While the setting might not reflect it; the entire series seems like an homage to the earlier iteration of the book when it was popular under creators Chris Claremont and Bill Sienkiewicz.

Have you seen this:
REVIEW OF SUICIDE SQUAD ONLINE SLOT GAME

Speaking of Sienkiewicz the look and the feel of the art produced by Rod Reis is such a heavy nod to the former famed artist that the book’s head is scraping the ground. The visuals on New Mutants are a throwback to the early days of the ‘80s and it has just enough retro to make it hip again…hip is still a thing right? Shit! I’m getting old.

Ries’ artwork is the perfect backdrop to the fantastical tale that is being told. Space, swords, coffee made from mutant poop… you have to read the issue, this one has a solid start at being something totally different from the rest of the serious X-Universe.

I don’t know where this book is going but I know that I’m going along for the ride.