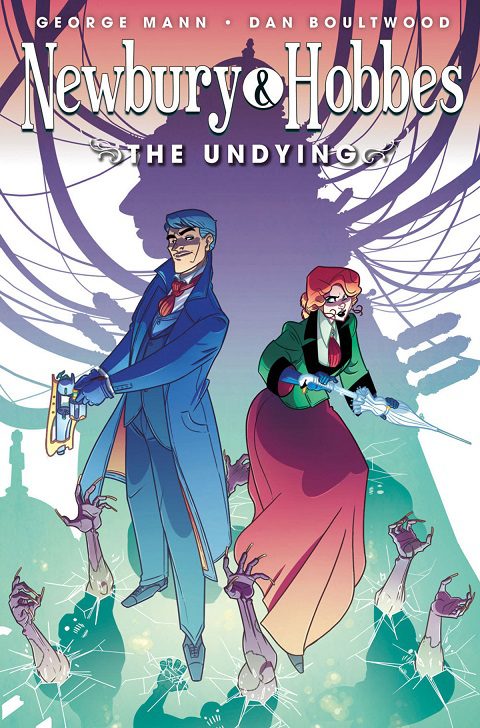 Newbury & Hobbes: The Undying is a new adventure, mystery story where our main characters are trying to figure out two separate cases that are dropped in there laps. The first case is about a cult group kidnapping people in the city, which we get a glimpse of at the beginning of the issue. It’s here that we learn the two can really handle themselves pretty well in a fight. Later on, the two are called in about a mysterious body that was found and is later to be discovered to have been part of an experiment of a previous villain. We do get an editor’s note pointing to the issue to go back to read, even though it does feel like they did a fine job going over what may have been the important event’s of that issue.

Newbury does most of the talking in the issue where Hobbes just sits in the background observing as we read her thoughts through the scenarios that we’re being taken through. At first I wasn’t really enjoying how the story drove off into a different mystery, as the one they are working on isn’t solved yet but that other mystery helped provide a bit of history for our characters. A majority of this issue really is a lot of setup. It’s trying to show you who are characters are, they way they interact, the society they live in, and provide a couple of antagonists. I think if there was more focus on just the mystery we were dropped in at the beginning the pacing may have been better. Things really pick up towards the end of the issue though.

I also really enjoyed the art here from Dan Boultwood. It gives off the vibe there is a lot of fun and adventure to be had and even with its lighthearted charm, you can see that he is fully capable of delivering heavy moments with this style. It’s a style that can be very pleasing for anyone that picks up the issue and I think it really helps set the tone for the book. It’s obvious they’re here to show us a good time but that doesn’t mean that they won’t pull punches when the moment’s matter. We’re also given information about the music made for the story here along with another short story at the end of the issue. Extra stuff like this is always nice to have, as it’s something that doesn’t happen often at all. I find this issue to be a fine start for a mystery adventure book. Our main two are very likable but I hope Hobbes is given a bit more in the next issue. With a good amount of foundation already laid out, I feel that the next issue will really pick things up as it seems that the chaos is just about to begin.