Night Trap to Return on PS4 and Xbox One

<Editor’s Note: I can’t believe this is a real thing. /Joe>

The 1990s were a strange time for violent video games as parents, retailers, and the government were often spurning the industry for corrupting the youth. Lucky for us, the most controversial release of 1992 is making a comeback on the PS4 and Xbox One. 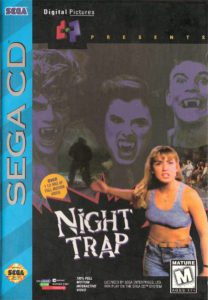 Limited Run Games has announced via Twitter that they will resurrect the provocative Sega CD title Night Trap with – you guessed it – a limited run printing this Spring. Limited Run games seems determined to preserve video game history with recent physical releases including gems such as Thomas Was Alone and Shantae’s Risky Revenge. 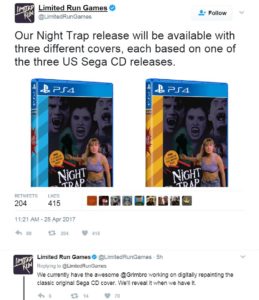 Night Trap was a horror title for the Sega CD that was the center of a Senate Judiciary hearing that was damning games as child ruining technology. The game itself is tame compared to today’s standards, featuring gore that pales in comparison to crime procedurals found on network television. Basically a “playable” horror movie (with very little player input), Night Trap follows a group of teens as they are terrorized by masked assailants in the suburbs. Due to the violent nature the title was pulled for stores and has become somewhat of a commodity among Sega CD collectors. The return to home consoles will be a great opportunity for fans and historians alike to experience a piece of history.

Are you a fan of Night Trap or is it too controversial? What would you like to see Limited Run Games revive next? Please comment below and stay tuned to GWW for more video game news.