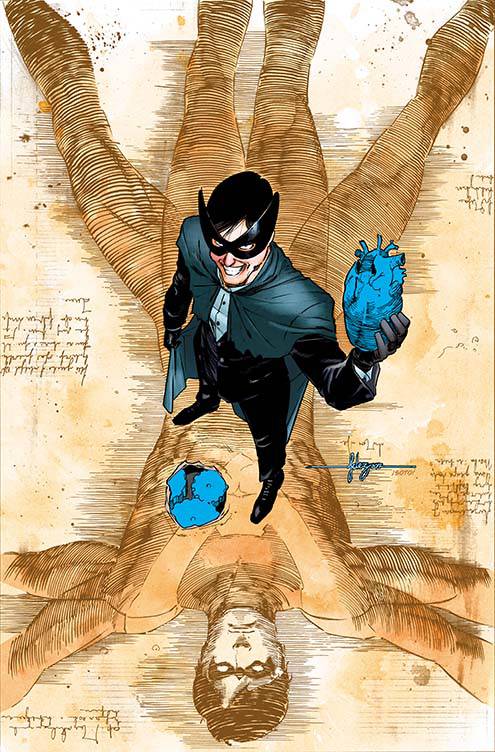 There’s a lot to like about the direction of this current storyline, but this issue felt a little short. Nightwing attempts to track down Damaian Wayne who was kidnapped by Doctor Hurt, setting up a face-off between two foes from the pre-New 52 universe.

Doctor Hurt is back and how exactly that came to be is still a little sketchy, but we can chalk it up to his devil worshiping ways. Whereas in the first volume of “Batman and Robin” he made it his mission to go after Bruce Wayne, he now has his sights set toward Dick Grayson. I’ve been wanting Hurt and Professor Pyg back as Grayson villains for a long time, so I hope this isn’t a

quick wrap up with these characters. It helps shine a brighter light on to Nightwing when he can go up against a bigger threat than the everyday spies or street level criminals he’s been going up against.

Deathwing on his own felt like a retread of past Batman storylines that featured an antagonist that was evil mirror image of the hero. Nightwing has faced a few of his own evil selfs, most recently Raptor. But by having him merely be a tool for Pyg and Hurt, it has made him more interesting. Grayson defeated his dollotron counterpart by using the knife that was used in him in the last issue, the same knife that allowed him to see infinite future versions of himself. Deathwing isn’t just what Nightwing could be, he is what Hurt wants him to be. Which makes you wonder what exactly Hurt is planning, but it must involve really pissing Dick off if he’s willing to kidnap and attempt to kill his girlfriend and friend. And no, I’m not sure why Damian Wayne was referred to as a friend and not brother.

By the end of the issue I’m left hoping that they don’t rush through this storyline and that Hurt and Pyg were just another monster of the week. Nightwing’s Rebirth may have started slow but it appears to be really picking up.