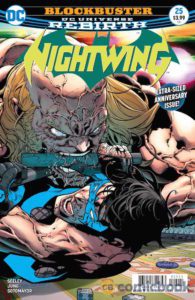 Blockbuster has left Nightwing and a bunch of criminals for dead, and it’s up to Grayson to save everyone.

I was wondering how Nightwing would get out alive after Blockbuster left him to disarm a bomb. Sure, heroes have been surviving bombs for a long time now, but you never know. The way he got out of it was very Batmanesque and I appreciate that. And like a true member of the Bat-family, Dick saved every single villain in the submarine. It was a good sequence that reminded readers of the type of hero Grayson truly is.

After Nightwing escapes with his life, the story splits off into multiple storylines and never truly concludes the Blockbuster’s arc. It’s a problem I had with the last story arc that featured Doctor Hurt too. The ride has been fun but it feels like Nightwing is all build up right now and not much else. And as much as I like Hurt and Blockbuster becoming Dick Grayson villains, one just seems a bigger threat on a grander scale. Doctor Hurt is a different kind of monster all together, and one that has gone up against Batman. Having him introduced first and then moving to a new street-level crime boss was jarring for me. The dichotomy of the villain threat levels was hard to ignore.

Have you seen this:
Diamond Select The Penguin PVC Diorama (Review) 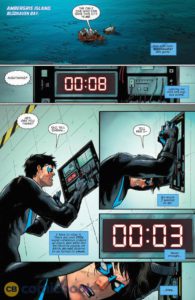 It’s been a ton of world-building, but Tim Seeley has succeeded in getting me to care about the city and the characters that inhabit it. Shawn being manipulated by Pigeon will lead to a more personal villain for Nightwing. Perhaps she will eventually become his Catwoman, which I think would be great. He already has his own Commissioner Gordon type character, and she hates him, it’s great. I don’t know if we will get to the Blockbuster and King Shark storyline next, but it does look like a tech villain is on the way, and that should be good.

There is a lot to like about this series. The art has continued to be consistently solid, both the colorist and the pencilers. This issue was no different, especially when Dick returns home to find an unhappy girlfriend. The art really set the mood for that conversation. Great action sequences again, which was the highlight of the previous issue. I love Seeley, he’s one of my favorite writers right now, but I need some closure. I already want to see what this is all leading to, including the Raptor arc. I’m hooked on these characters, so maybe I’m just being impatient.