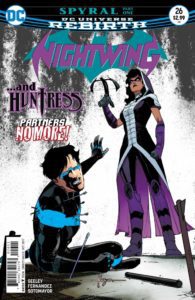 Huntress heads to Bludhaven to help Nightwing track down The Second Hand who has killed Giz.

This issue does an excellent job of reaffirming the kind of person Dick Grayson truly is. He blames himself for the death of Giz, but also makes a cadid remark about being the one bat-family member that must stop his fellow heroes from taking things too far. Huntress’ arrival only exacerbates things for Nightwing, as he attempts to track down the group that murdered Giz. 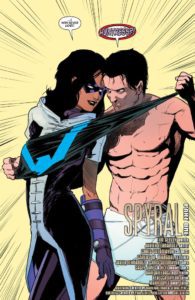 Whereas before it felt like Pigeon was in the ear of Shawn and manipulating her. This issue makes it seem like a team-up with her old partner in crime is of her own accord. It’s hard to imagine her returning to a life of crime, so it’s interesting to see what becomes of this partnership.

It was a surprise to see that there was only one artist credited on this issue. The characters and the creative team remain the same as the first story arc, but everyone looked different. Everything felt off, not in a bad way because the issue is solid all around, just different.

Nightwing looks to be picking up a thread left behind by the Grayson series. Which was a thread picked up after Grant Morrison’s epic Batman run. Huntress showing up at Dick’s apartment feels too convenient, which might hint at a big spy mystery coming. This was an intriguing start to a new arc with exciting implications.

One thing this series hasn’t quite mastered yet is giving readers a true hybrid of the superhero Nightwing we know and love, and the spy thriller series Grayson was. There were always hints of us getting the best of both worlds, but it never went that far. This issue may steer us closer in that direction.