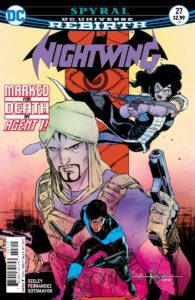 Spyral has been revealed as the weapons dealer called Second Hand, and now they are after Nightwing and Huntress. Both former spies must now take on their old companions.

This series continues to pull from recent storylines Dick Grayson has been involved in, with both the superhero and spy stuff. It’s like a mix mash of greatest hits, and all we’re missing is a Deathstroke arc or him becoming a Blüdhaven police officer. It feels like Tim Seeley really gets what makes Grayson tick, and is taking the time to reintroduce popular Nightwing lore. 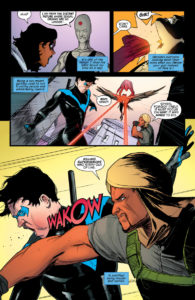 It was obvious that there was more to Spyral going evil than meets the eye. Even in a recent issue of Batgirl and the Birds of Prey which featured Nightwing, Huntress called on Tiger and Spyral for help. Sure that could have been during the time the spy group was laying low as the Second Hand, but why help your enemies at all? Continuity is tough to keep track of in multiple books, but it was something hard to miss while reading both series. So, the twist at the end wasn’t surprising but creepy and mysterious in a different way. This story arc is already a win for simply bringing Lotti and the other Skull Girls back. The next issue is a butt joke away from going full on Grayson, and I couldn’t be happier.

Maybe this is a bad comparison but the artwork by Javier Fernandez in this issue was reminiscent of Frank Quitely during his Batman and Robin run. Quitely is a beloved artist but has always been hit or miss with me personally, and I feel the same with the art in this issue. There are things I’m not blown away by and the. there are the I do actually enjoy like the action sequences which are composed incredibly well. Understanding that this is more personal preference than a critique, I haven’t been totally happy with the last two issues of Nightwing concerning the artwork.

Overall, I am enjoying this Grayson spy-esque story. So far this series continues to chug along turning out solid issue after solid issue. Whether it will elevate itself beyond that remains to be seen.