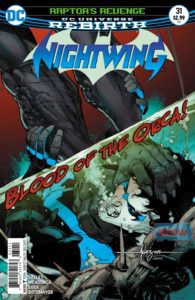 Raptor has found out about the alliance between Nightwing and Blockbuster and makes his move on Roland.

Dick Grayson choosing to team up with a mob boss is as shady as it gets, but Raptor attacking Roland may have just been enough to solidify the shaky allegiance between two enemies. This issue does an excellent job of setting up the inevitable battle over Blüdhaven. Credit to writer Tim Seeley, for finding a way to make it personal for so many characters. Though unlikely, there are a lot of villains involved and they could just as easily gang up on Nightwing. Raptor’s monologue on class-warfare really hit home why he feels so betrayed by Grayson. He’s been a fantastic new villain, and he keeps getting new layers added to him.

Though I’m happy everything is coming to a head, I can’t help but feel like there’s a missing chapter of Blockbuster. I hope the new creative team doesn’t forget about him if he’s around. Also, the end to the NightHunt was abrupt, to say the least. I only just came up with that sweet ship name. 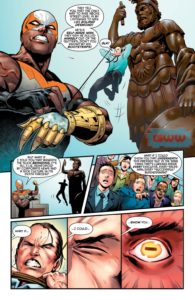 The new artist is one of the strongest of the series so far. It’s the same colorist yet the art just pops more. Earlier issues had a problem with pages looking flat and the colors looking muted. Everything really clicked on this issue.

This issue kept at a steady pace and had some strong moments at the beginning along with a surprising revelation toward the end. The Huntress situation seemed harsher than it should have been, but this was a solid issue that did a great job of setting the table for what’s to come.