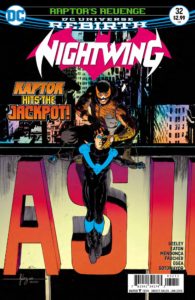 Raptor and Nightwing finally show their cards, while the Run-offs look to involve themselves in the battle over Blüdhaven.

We finally get a glimpse at Raptor’s true backstory, in an intense face-off between him and Dick Grayson. It’s an interesting origin but what made this issue fantastic was seeing Grayson show off his detective skills. Writer Tim Seeley, has done a great job of not only world-building but also progressing Nightwing to his former glory. New 52 took a lot of character development away from the former Robin, but this current run has brought back a lot of important aspects that helped the Nightwing grow. No matter what happens in the final issue of the arc, this run has to be considered a success. 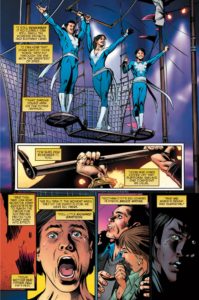 The Run-offs have such a prominent role in this story that it’s going to be such a shame if they don’t return sometime in the future. They’re so likable that I actually wouldn’t mind seeing them get a spinoff comic book at some point. All the villains in this run have endeared themselves to me, I want more of them. Except for pigeon, she’s just an awful person.

There were two artists on this issue but I couldn’t tell where one ended and the other began, which I’m grateful for because it kept the art style consistent. I enjoyed both quite a bit, but credit to the colors of Chris Sotomayor who really tied this whole issue together on the art side of things.

This centered around Raptor’s origin, so there wasn’t a lot of action, but it was definitely an integral part of this run. For now, the villain is unsympathetic, which I want more of. Not every bad guy needs a sappy story. Though Raptor isn’t a monster so there may be some redemption for him yet. Also, When Grayson turns the tables during their conversation at the casino, he mentions Raptor wearing different heroes clothing. Which sounds like an interesting story in its own right, but that’s all we get. I still can’t shake this feeling that they are rushing toward the finish line. Which is a shame, but things are getting fleshed out.