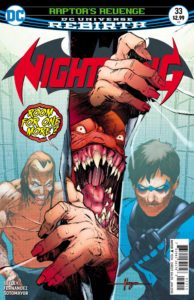 People are being infected by the new Blockbuster formula. Now Nightwing and Roland must work together to stop a bunch of roided out citizens and get to Raptor.

After some teasing in previous issues, we finally get to see Nightwing team-up with his arch nemesis Blockbuster. Them becoming allies doesn’t quite have the same impact that it would have had in the Pre-New 52 timeline, but watching them fight off brainless versions of Blockbuster was pretty fun. Tim Seeley really did a lot of heavy lifting when it comes to rebuilding Dick Grayson’s relationship with his adopted city of Blüdhaven. So much was lost after the reboot but this current run has truly made it his home again, one can only hope the next creative team doesn’t stray from what was done.

Raptor and Pigeon’s close relationship with each other seemingly came out of nowhere. I feel like I’m missing a chapter. Also, Raptor somehow feels less dangerous now then he did at the beginning of the arc, but that could be because of his feelings for Grayson’s mom. 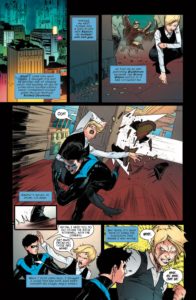 For some reason, Javier Fernandez’s art is consistently a hit or miss for me. This issue was a total hit, there were some great action sequences and some classic Nightwing panels throughout. Also, colorist Chris Sotomayor always deserves praise for the job he’s been doing.

This has been an entertaining story arc that will finish off a very important run for this creative team. The tension isn’t as ratcheted up as I would like it to be, but Raptor has truly been a menace worthy of becoming an arch nemesis.

DC comics Nightwing Tim Seeley
Are you an Insider?News, reviews, & updates are just the beginning.