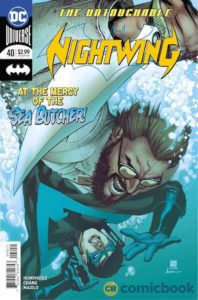 The Judge leaves Nightwing to drown and then has a meeting with a Casino owner with a dark secret.

I really appreciate the opening scene to this issue. It’s an old trope but I can’t get enough of Batfamily members being tied down and then breaking free with some insane tool. With Nightwing only having seconds of air left in his lungs, he head butts and antagonizes a squid to help escape in time. There are also some scenes with the ex-vigilante Lucy, who I would like to see more of after Sam Humphries run. Not just for diversity sake, but she has an old-school style of hero vibe to her. Seeing a hero defend her town with only a baseball bat is very Walking Tall, and I’d be all for it.

The rest of the issue focused on the Judge still enacting some elaborate plan. I think the problem with this story arc is that it’s trying so hard to convince readers of emotional distress but none of it is landing. I never once felt like Dick was in any danger, or that the Judge has caused him so much misery. The best way to explain it is that I’m having trouble immersing myself in this story. And trying to make brand new characters such an integral part of Dick Grayson’s life in a single arc is a tough task to begin with.

Have you seen this:
SWEET PAPRIKA # 1 (REVIEW) 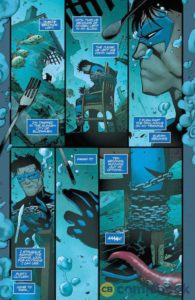 The smartest thing DC Comics has done over the years is continuing to bring Bernard Chang back, his art is wonderful. He’s drawn almost every character in the universe, the standout being his Wonder Woman run, and everything he’s done has always looked amazing. His Nightwing is more of a powerhouse compared to previous incarnations which have been quite slimmed down. Grayson is always drawn as ripped but he’s not Batman level size, but Chang’s version could give Bruce Wayne a run for his money. Something about how Dick Grayson is being drawn makes him feel like a more intimidating and significant figure.

I always review art by determining whether the artist was successful in expressing themselves or not. So far in Sam Humphries run, there’s a lot of neat new additions to the Nightwing lore, but there are also a lot of things that just aren’t having the impact Humphries was probably hoping for. Good action and art aside, the plot hinges on reader believing that Nightwing is emotionally compromised by an old foe he met as a child. The problem is I don’t really believe it, something the man who made me fall in love with two new Green Lanterns should be capable of.