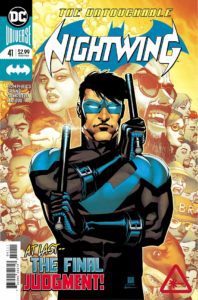 Nightwing escapes death and attempts to take down the Judge, if he can fight his guilt long enough to do so.

When you cut deep into the premise of this run, you see a story that gets exactly who Nightwing fundamentally is. He inspires, never gives up, and believes in the best of people. All of which was showcased in these past few issues of the series. His inner strength and his ability to never sink too low is what makes him such a powerful character. Sam Humphries clearly knows the character well, he added to the mythos and helped Dick Grayson carve out a place in Blüdhaven even deeper. Much like Tim Seeley’s time on this series, I feel it points the character and his new surroundings in the direction. The conversation in this issue with Guppy talking about murdering his father and the guilt that weighs on Nightwing because of it was spot on. Also, the last page was very Dick Grayson. 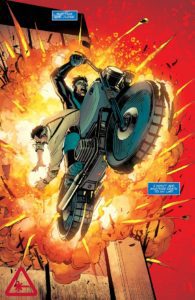 The Judge has a neat concept that is a bit of a twist on the Purple Man of Jessica Jones. He had the makings of a special arch nemesis and yet it never hit for me. For such a persuasive villain he never took advantage of his powers and his threat level felt awfully low. Also, he was supposed to be a thorn in Grayson’s side for years, someone who haunted the former sidekick, yet I never believed it because I’d never heard of the Judge prior to this run. I was never sold on the bad guy and it took some enjoyment out of the rest of the story, which had some cool characters.

This wasn’t a bad issue and this wasn’t a bad run, but it wasn’t anything out of the ordinary which is surprising given the creative talent behind it. Bernard Chang is as good an artist as you can get and Sam Humphries took two random Green Lanterns and made me fall in love with them. Honestly, that Lantern run is as good as any I’ve read, Humphries is a big-time talent. But something about these Nightwing issues didn’t click the same way for me. With that said, there is still a lot for future writers to build off of, including The Judge and a deeper supporting cast. Seriously a villain who can control people in the way this one did could be a force to be reckoned with, I’d love to see him pop up again. I wanted more, but that doesn’t mean I’m not happy with what I got. A solid run and a finale that rings true to the character.