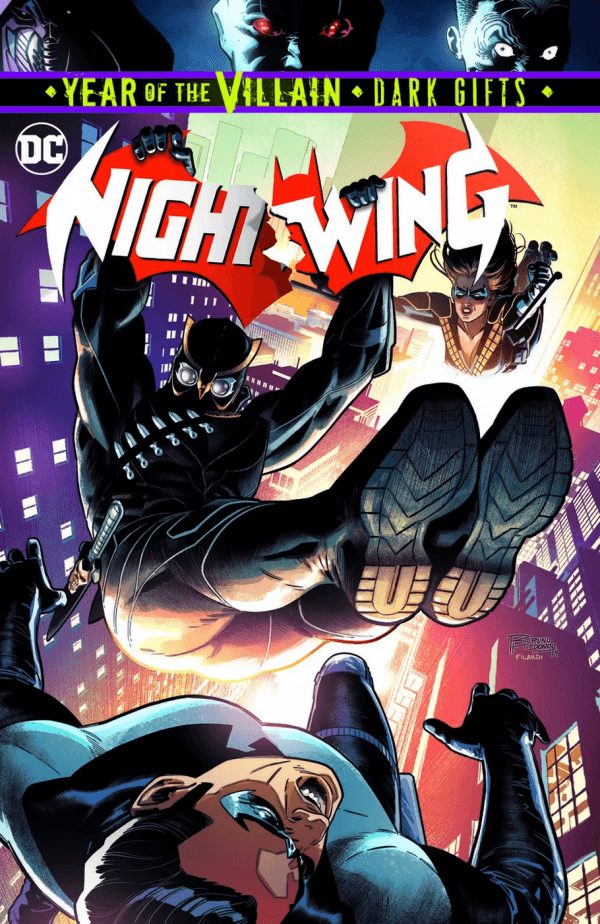 When DC decided to go in a new direction with Nightwing, I was among those open to the move. I held out hope for a while, but it the differences between Ric and Dick Grayson weren’t what I was hoping for. In fact, it’s been clear for a while, Ric has reverted back to his old self. He just doesn’t want to be Dick again. (Wonder why that is.)

The “edge” he was supposed to have quickly devolved into Ric becoming a stubborn brat about one thing. He really is the same person otherwise. Nightwing #63 continues to prove that again.

However, this issue does raise the bar a bit. We have the return of Talon, who showed up in Nightwing #62, and he is not playing games. But again, it’s not Ric who’s giving the story a different feel — at least in a good way.

(Spoilers ahead. Don’t read further if you have not read all of Nightwing #63.)

So Ric has gotten along well enough with the other Nightwings, but they’ve had their suspicions along the way. Mainly because he’s a better fighter than the rest of him and they have no idea where he learned his moves. Not to mention his great vigilante instincts.

In the course of getting to know the Nightwings more, I’ve personally grown to appreciate Malcolm Hutch and Colleen Edwards more. Malcolm is built like a brick house and Colleen has that “edge” DC just can’t seem to give Ric.

Then there’s Zak Edwards, Colleen’s brother. Of the four, he’s been the most apprehensive about being Nightwing. I respect that. At the same time, it’s a little annoying. But it looks like he’s moved past that.

Having said all that, it looks like Ric and Zak are becoming friends. The last person I thought Ric would buddy-up with. He was furthest in the background of the four characters, yet now he’s moved to the forefront of the foursome.

Especially after Talon torched him (metaphorically). Man, did William Cobb — Ric’s relative — go to town on Zak. I can’t believe he lived through the ordeal. At last in the image we saw, Zak was stuck with seven knives all over his body. Gruesome image from Ronan Cliquet. And Nick Filardi’s colors really added to Talon’s vicious attack.

Speaking of Cliquet’s artwork, he’s a good fit for Ric given where he is mentally. When it seeming like Ric was on the path to becoming a badass or even a degenerate, Chris Mooneyham was a better fit. His artwork is raw. Now that Ric’s basically his old self again, Cliquet gives him a purer feel.

Looking ahead to Nightwing #64, if Talon seriously harms Be a, I wonder what direction Dan Jurgens will take with Ric.