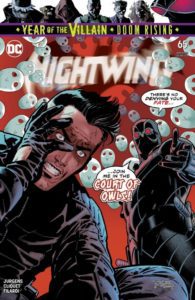 Nightwing #65 is, without a doubt, the best issue of Nightwing since Dick Grayson became Rich Grayson.

There’s nonstop action. He has to battle his past — this time he can’t run from it.

Meanwhile, the Nightwings have their hands full as Bludhaven’s descent into madness continues. (Actually, it’s well past madness at this point.) With Zak still hospitalized and Ric occupied, the remaining three have their hands more than full.

(Warning: Spoilers for Nightwing #65 ahead.)

William Cobb (Talon) is really what makes Nightwing #65. As much as the action is great, what he does so well is impose his will on Ric. Unlike Batman and Batgirl, Talon won’t give Ric space. He’s always had a goal for his great-grandson, and there’s never been a better opportunity to see than through then now.

Hopefully, for the sake of all Nightwing fans, this eventually forces Ric to come to grips with reality. Try as he might, there’s no way he can completely run from his past. Maybe a bizarre experience like this — where it seems he’s about to be brainwashed — will force Ric to reconsider things once he escapes Talon’s grasp.

Dan Jurgens and Ronan Cliquet gave a nice nod to Ric’s past when he picked up the metal pipes, paying tribute to his escrima sticks. In a way, this shows how Ric can’t run away from Dick, no matter how hard he tries.

Looking at the larger picture, if at the end of this whole experience Ric becomes Dick again, I think it will all have been worth it. It’s been a frustrating experience, no question. But it’ll be something that helps shape Nightwing going forward. Also, it’ll serve as another example of Dick Grayson’s ability to persevere in the toughest of times.