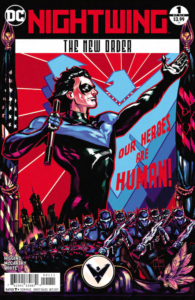 An elseworlds-esque story starring everyone’s favorite Nightwing, Dick Grayson. What an interesting focus for a comic book! This is not unique by all means for a DC comic but it has a fresh premise that is sure to fascinate even the most casual of fans. To find out if this is a well-executed comic or is just another forced alternate future story, let’s dive into Nightwing: The New Order #1: Chapter One (of six)…

This is not the familiar Gotham City you’re used to; this is a new, dark world for superheroes. I get this post-apocalyptic feel with the environment in the comic but it is more or less a dystopian future. The feeling comes from a huge battle that is hinted at that killed many of the world’s heroes and how different the world is after this. From the brief flashback we get of that battle, Nightwing saved the day but at the cost of his friends’ lives. It’s a dark revelation because some serious events went down that day. Since the full details of the battle wasn’t told in this chapter, I’m highly intrigued as to see the revelations of it.

Dick Grayson has a son and the mother is still a mystery; another intriguing element that 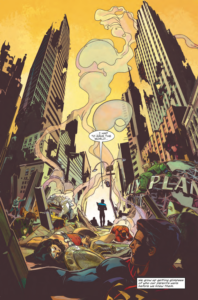 keeps me wanting more. His interaction with his son and Alfred makes me feel so nostalgic of the family relationships and dynamic of the Bat family. Because of the events of this battle, Dick Grayson now has a hatred toward metahumans and has helped to create inhibitors to suppress the superpowers in his “Crusaders” team. This is an upsetting turn of events for his character. I’ve always seen Dick as a strong, compassionate character and it’s terrible to see that this battle has affected him so negatively. He’s as cocky as ever and now letting the fame to his head.

This story another example of making superheroing illegal in an alternate reality, a la Watchmen, that brings a fun and dark dynamic to a world full of people with superpowers. I love Alfred trying to talk to Dick about how it is wrong to hate these people because of the way they are. It tells such a strong message that is socially relevant more than ever that more and more people need to learn from this statement. The cliffhanger has me excited to see where this story is going to go. I won’t spoil it here, but my guess is that Dick’s decision to inhibit the metahumans is going to come right back around to him in a way that will show him what he’s done is wrong.

Nightwing: The New Order #1 is a deep look at a dark future of suppressing a certain group of people from a beloved character. It has a dystopian feel to a story that can still be fun at moments. With great art and amazing storytelling, this comic is a must read.