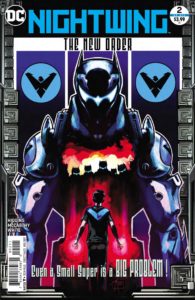 Dick Grayson has spent years repressing super-powered beings for the good of man, and now he finds out his own son has powers.

The symbolism and social commentary was laid on very thick in this issue, but not to its detriment. It emphasizes the struggle with being a father as well as an authority figure. This story has excellent world-building and makes it easy for readers to immerse themselves into this similar but different DC Universe.

It needs to be said, no matter how annoyed some people may get by it: this is exactly what Secret Empire should have been. Marvel readers were given a villainous Hydra-leading Captain America, but were promised a story that celebrates what makes Cap so great. It was a lie, more specifically, it was damage control. The event turned out to be the soulless gimmick everyone expected it to be. Cap was simply evil, and then we got a version that simply wasn’t anymore. In Nightwing: The New Order we get a far more complex premise that focuses on Dick’s actual character development. Like what made him take away 90% of superpowers, why does he lead an anti-super power task force, and does he feel regret over it. Kyle Higgins is putting readers in the head of Dick Grayson as he learns the consequences of authoritarian law. 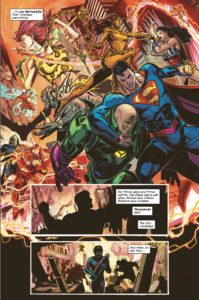 Kyle Higgins took to his Twitter this week to give us a sneak peek of the team-work it takes to produce this comic book. As the writer, he gives a vague idea of what is being said on each page, and then artist Trevor McCarthy, does the panel layout which influences how Higgins tells the story. It was a really interesting behind the scenes breakdown, and gave a new appreciation to the team as a whole. Including the letterer and colorist, Clayton Cowles and Dean White. They’re all really clicking and it’s showing in this so far great story.

Though we get a lot of the story and motivations in this issue, as well as a glimpse at the war of Metroplis that pushed Nightwing, it all felt a little rushed. The first issue moved at such a methodical pace that it felt like we would get a chance to stay a little longer in this world before everything goes to hell, but that’s not the case. Jake inheriting his mom, Starfire’s, powers has turned Dick’s world upside down. I feel the story would have benefited from marinating in this alternate universe’s status quo a little longer. But this is still a very compelling story, that has a lot to say. Also, I’m going to hold out a bit of hope that a certain beloved Batfamily member isn’t killed off in two separate series on the same week. What a heartbreaking coincidence, a Batman fan’s heart can take so much.