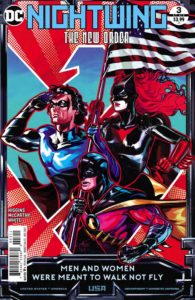 Dick Grayson has become a desperate man after losing Alfred and having his son kidnapped by the anti-meta organization he helped build.

Kyle Higgins is doing something special with this story, something far more intimate than anything else he has done in the DC Universe. As I stated in a previous review, I appreciate that this story is tackling the morality behind the suppression of every metahuman. Even when Jake is taken away by the organization he helped build, you still have characters pointing out to Grayson that he did the right thing. Nightwing would have looked like a hypocrite if he had his epiphany about power only after it affected him. Circumstances have made it obvious who to root for, but you can’t begrudge characters Batwoman, John Stewart, or even Tim Drake for what they’ve done. The ambiguity of it all is what makes this such a fascinating Elseworlds story. 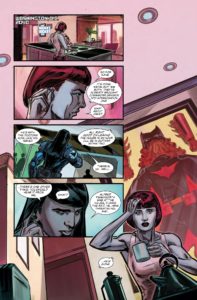 One of my favorite things about the art in this series is how consistent to the covers the interiors have been. Usually, covers are done ahead of time and have very little to do with the actual comic, but not with Nightwing: The New Order. The old propaganda style covers set the tone and act as sort of a prequel to the actual series. They show Nightwing and the characters fully immersed in their way of thinking.

There are a lot of cameos but this continues to be a Dick Grayson story the whole way. The New Order may go down as one of the best Nightwing stories ever, I can only hope that DC and their readers feel the same way. They should reward such a bold series, that is not afraid to take some of the shine off of DC’s brightest heroes. I don’t foresee them making all the moral grayness magically disappear, so I’m excited to see how this will finish.