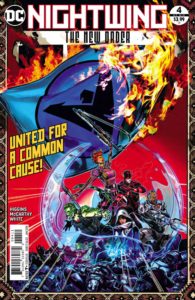 Dick Grayson is saved by his former Titan teammates which leads to an uncomfortable reunion between him and Starfire.

As expected, there was a ton of tension between Nightwing and the Titans, but surprisingly it was Dick Grayson who seemed to be the most upset. Considering he’s the one who took everyone’s powers away, you would think the others would be furious. Perhaps he just feels abandoned by his friends, he certainly does feel that way about Starfire who took off on her husband and son, Jake. I wish that had been better explained, but it will probably be fleshed out in the next two issues anyway. The inclusion of a Blue Lantern Lois Lane was interesting, unlike Superman I don’t recall her ever associating with the members of the Teen Titans before. So, I was too confused by certain aspects of the issue to fully enjoy the reunion, but it was a solid issue and more importantly revealed why Jake is so important. 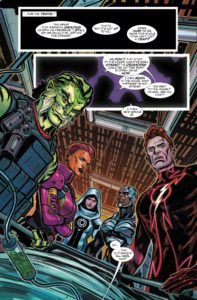 Trevor McCarthy’s artwork was superb as always, but in this issue, we got to see some new character designs. The beast-looking Beast Boy was my favorite. I believe he was half tiger, and it looked great. Wally and Starfire’s new looks were very futuristic. Flash looked like something out of Tron, but that more than likely due to the fact that it uses the speedforce. Outside of Beast Boy, Kory had the most drastic change, I didn’t recognize her at first. One of the most exciting things about a futuristic elseworld story is the new costumes, and this creative team brought on some interesting new takes on classic characters. They nailed it.

This was a solid issue, perhaps the weakest of the series, but it was still a highly entertaining read. The ending was. A huge shock and we may finally see the Titans fighting together. I adore this mini-series so far, Kyle Higgins always brings it in whatever he’s writing.

Kyle Higgins Nightwing Nigtwing: The New Order
Are you an Insider?News, reviews, & updates are just the beginning.