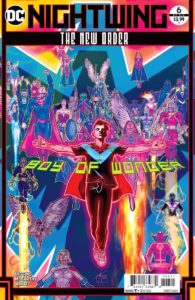 The finale to this Elseworlds story is here. Dick Grayson looks to make a deal that will allow him to keep his son Jake out of harm’s way.

This was a really strong ending to the story, which could have easily gone horribly wrong. Nightwing: The New Order took the time to show you why such a hopeful character would lose himself, and then built toward his redemption which even then wasn’t a clean turn back. Unlike Secret Empire where Captain America just flips the fascist-switch in his head and then magically gets switched back. I appreciate that Kyle Higgins didn’t mind challenging our perception of Grayson, and it made for a better story. Even up to this last issue, he had no problem selling out his friends and the resistance, to save his son. It took Jake’s hope and trust in people to save his father and the world. They built up his character to be more like Nightwing, which was a wonderful twist.

Trevor McCarthy’s illustrations were fantastic throughout the series. As stated in previous reviews, all of the visual storytelling was laid on his shoulders and he always made such creative decisions. Credit to Dean White too for helping create such a vibrant future of the DC Universe even though it lacked most of its colorful characters. 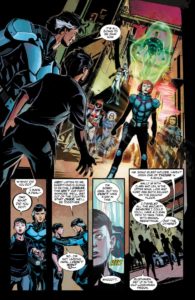 The New Order moved at a good pace and not a single issue felt like it was stretching out the story, but there were a few things I felt should have been touched on more. Lex Luthor’s fate though expected, probably should have received more emphasis considering it becomes the climax of the story. Also, with me having divorced parents, the relationship between Jake and his estranged mother Kory rang true. Which is why I would have liked proper closure for it. And of course, the talk between Jake and Dick probably should have taken place in the previous issue. Just to give their talk and the result of it some space to breathe. It didn’t feel rushed because Jake is the true hero of the story and they built up his ideals throughout the series so him inspiring his father makes sense, but it was a quick turnaround. Though minor complaints, it did keep this final issue from being perfect, though it was still fantastic.

Nightwing: The New Order delivered on being an exciting and thought-provoking Elseworlds story. Through his son, we were able to see what makes Grayson such an inspirational hero. This will be one of those series that Nightwing fans suggest to new readers for years to come.