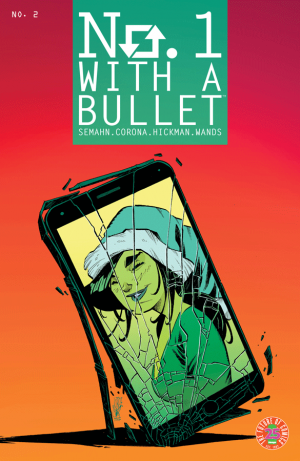 No.1 with a Bullet is a shockingly terrifying comic and it’s not even necessarily in the horror genre. If you think cyberbullying can be bad now, imagine it in a not so distant future. Smartphones aren’t the only means of invading your privacy. Every minute of people’s lives is spread all over social media. Whether it’s the meal you just ate, who you’re going out with, the latest selfie you take, or something you DON’T want out there.

No 1 with a Bullet #2 starts with the breaking down of Nash Haung. Issue 1 ended with her discovering there’s not only a sex tape of her and her famous boss Jad Davies, but he’s also bringing lawyers in accusing her of leaking it. Her girlfriend leaves her. People all over the internet say horrible things about her, “Kill yourself,” “You’re a whore,” and “knows how to f*ck.” And to make matters worse, Jad’s lawyers force her to signed papers stating she couldn’t say it was him in the infamous leaked video.

Once a friend gets Nash out into the real world we see that cyberbullying causes problems way beyond what the digital landscape. Not only were all eyes on her, there’s even a hate group of some kind coming after her physically. They wear a symbol and even release dogs onto her only to return to the others to brag. They are truly a vile group that I want to learn more about. She finally gets angry enough, she fury texts her boss after seeing a woman on the news she thought was an enemy stand up for her. She explains that cyberbullying is an abuse of the mind and that whoever did this to her needs to be burned. Even after exposing herself as a victim, the torture does not stop.

One of the biggest reasons I love this comic is the way Jacob Semahn is able to invoke a sense of realism. I know we don’t have contact lenses that can let us see things that aren’t happening or record things, but I have a teenager and even without the extreme advances in technology, Semahn is able to tell a story a lot of them are living at this moment. The art is so important in this book because it’s really showing Nash going through hell. It’s executed perfectly on the pages in front of us like we’re feeling every social media strike with her. And the colors only further enhance this experience. The cover is what made me want to read it. I’m also on social media and I read some of this extreme battering and when it’s not someone that is close to me it admittedly amazes me. So How far-fetched is Semahn’s vision? There’s not a lot of privacy in the world of social media and its only getting worse. If you want to read something new that will disturb, scare, yet intrigue you, No. 1 With a Bullet is a comic you should follow.