No. 1 With A Bullet #4 Advanced Review 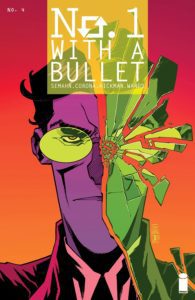 This issue picks up directly from the end of number three. Nash’s state of mind is foggy, to say the least, but with good reason. Her life is starting to resemble a wormhole. She’s talking to a dead woman one minute, the next waking in a pile of bones. The opening direct message from one of the antagonists WHENTHEMANCOMESAROUND was the creepiest yet and I believe she’s going to be facing him/her very soon.

No.1 with a Bullet has become one of my favorite new titles because of its distorted twists on what is the reality of some aspects of social media. In issue four, we’re seeing mainly truly comic unrealistic traits, yet still her trauma from what she is being put through. Her reaction. Just when we thought Jad was going to do the right thing, the media scumbags dive in. Not unlike anything in our world. Sorry, I have to use the terms “Fake news”. Nash is all over the place. Almost seems 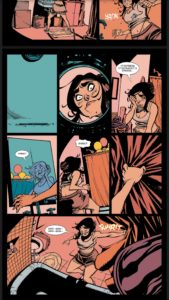 like there are gaps missing. Possibly blacking out. Once waking up on the ground. Only to be called a tramp, yet again. She’s borderline suicidal. By the end of the issue, a few things tie together and she’s finally had enough. When “When the man comes around” is hacked onto Jad’s Car radio, I had a HUGE fangirl moment! Without spoilers, it’s was with good reason.

Issue four was a peak issue for me. Almost in a sad way because I know it’s reaching its conclusion. This was a test, as we see in the direct message, but not for only Nash. I believe it was for Jad as well. The build-up and tension to “will he” or “won’t he” was just incredible. Villain redemption stories can be a good thing, or not. The portrayal of a character’s descent into a psychotic then suicidal state is pretty amazing, especially to be reading in a comic. The art is what blends along with it to show her expressions change. You can quite literally see pain, fear, and confusion. Overall, I’ve enjoyed this series so much! I cannot wait to see Nash get revenge. Which I definitely foresee happening.

comics Images comics Jacob Semahn No. 1 With a Bullet
Did you miss breaking news?We publish new content every day.