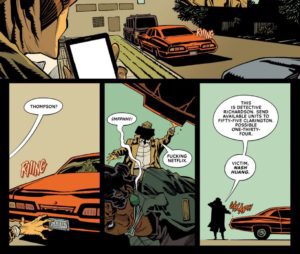 While I’m sad to see what became one of my favorite new comics go, the end, OMG, couldn’t have had a better outcome! After reading each issue I had more and more theories that were just totally shot down. That’s what made this issue even more spectacular. It is an end our Heroine Nash so desperately deserved. She will still have some demons to deal with but who wouldn’t. There was a lot of realism with a horror twist and that’s what kept me reading since issue #1.

In what I’ve seen to be Semahn’s very intense fashion, the final issue even made me wonder what was exactly going on until the final panels! What I thought I knew from the previous issue was not at all how it concluded and that’s what made the ending so perfect, well, quite a few reasons that all can’t be mentioned in a spoiler-free review. When Nash wakes up in the beginning to another horrifying state of distress, it made me think the secrets surrounding her loved ones and herself were revealed. Not at all! It took her finally looking at and trusting those around her. Even with her eyes scratched out as in issue #5, she saw more then she saw more than she ever did with her actual sight. She realized just as I did as a reader, not to believe everything she thinks she knows. Nash finally decides to go by her own instinct without any outside influences. That’s a huge part of this whole story. Don’t believe everything you read. Don’t believe what you see on the internet. The surprise ending pushes that point further. Social Media bullying and cyberstalking can be traumatic and needs to be taken more seriously!

Have you seen this:
Refrigerator Full of Heads # 1 (Review)

One of the biggest reason I’ve loved this series is the realistic aspects it depicts. That makes it 100% more terrifying than any horror comic I’ve ever read. It puts the spotlight on not only the social media issues but how it is affecting many females in the virtual world. And how it carries with them into their personal lives. The final issue was a perfect display of how much it seriously affected her. She second-guessed herself all the way up to the final panel. PTSD symptoms and all. Once again the writing and artwork display exactly what the character is feeling. The whole spectrum of anger, sadness all the way to euphoria is perfect. I’ve grown fond of Nash’s expressions and her thoughts on the world around her. The story that was built showed a girl in distress and extreme vulnerably that became a strong and stubborn heroine that wasn’t taking anyone’s shit! The build-up to that end was superbly written! I was even frightened to read the final issue and I’m not ashamed to admit I cried. That’s how well done this whole story has been. From actual words down to the extremely scary artwork. I built a connection with a fictional character. If I book can leave you with strong emotions then it’s bee now done right! I’ll miss this title a lot. Was just so happy to see the outcome that Nash deserved.