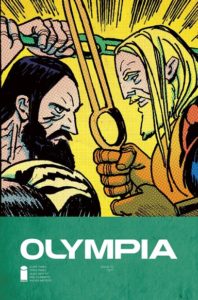 Olympia’s own backstory makes it really hard to give this comic a fair review. The series was written by the father/son duo of Tony and Curt Pires while Tony was undergoing cancer treatment. The comic also wears its fanboy pride on its sleeve with homages to Stan Lee and Jack Kirby. The fan service is so heartfelt that someone should have told them to tone it down. This is where problems begin. As much as this comic has going for it and as much as you want to root for and support its creators, (considering the terrible place this story started within the creators’ personal lives) I have to give our readers a fair and balanced review.

The story of Olympia is one that fans have seen time and again in comics. A hero, the titular Olympia (a fictional character in a young boy’s comic) suddenly comes to life in the real world. We’ve seen it recently in Mark Millar’s Marvel mini-series 1984 and the latest relaunch of Mighty Mouse…along with I don’t know how many other TV shows and cartoons. The Pires family is not recreating the wheel here.

While I appreciate the sentiment and the effort that this book’s creative team has put forward, and I sincerely hope that Tony has successfully fought off his cancer, I can not let this book get a pass.

It’s an exercise in comic fans navel-gazing into the world of comics. There is little here that sparks the imagination. If I wanted to read and see Stan and Jack I would read their work, not an homage or imitation that leaves me yearning to read my old Marvel back issues. While I want to engage in this comic I can’t. I keep seeing elements of other stories that were done better elsewhere. The only moment that this book caught my attention was the end. The cliffhanger was decent…but not good enough to make me want to pick up the next issue.

The artwork is a clone of Kirby’s classic style. The story is lackluster. The plot is flimsy. The comic shop scene was packed with little winks and nods to the industry that made me cringe. Filled with references Diamond and Comics Buyers Guide stuffed in to let other fans know that the Pires are legit.

I don’t like being a prick when it comes to books like this. It takes a lot of time, money, and energy to produce the final product that I’m reviewing. I understand for the creators that this was their life for months, if not years. I take no enjoyment in calling this book sub-par but that’s what it is when held to the same standard as the rest of the industry.