The One You Love To Hate: A Gazlowe Guide

Gazlowe is one of the most unique heroes in Heroes of the Storm. He is a class of his own even though he is recognized as a “specialist”. Gazlowe has a high dps output both over time and in burst and allows zone control for maps through his turrets. A good Gazlowe player can use his turrets to push an enemy team in a certain direction and can constantly be placing turrets and abusing his passive.

Let’s be honest, Gazlowe is not a popular hero. Whenever you see him being played you think “Man, this guy is a troll”, but in reality Gazlowe has the highest numbers in damage of any hero in the game if you look at it on paper. I love playing the unfavored hero and making him good in my own way. My philosophy as a player is that any hero is meta as long as you can make it work on a competitive level. The most important reason why I love Gazlowe is he is incredibly FUN!

Destroyed enemy Structures and your Rock-it! Turrets drop scrap. Collecting scrap restores 30 Mana and causes his Abilities to cool down twice as fast for 3.07 seconds. Activate Salvager to dismantle a target Rock-it! Turret and turn it into scrap.

Salvager is Gazlowe’s most useful tool and most deadly tool. You can have up to 7 or 8 turrets if you scrap enemy walls and structures fast enough because of the 2x cooldown reduction per scrap picked up for 3 seconds. Not only that but this is your only way to keep up with mana, and so when you are done with your turrets and moving up make sure to scrap them and pick up the little bolts so that your turrets come back faster and you can begin to regain some mana.

Turrets are the bread and butter for Gazlowe, if you know how to place a turret you can out dps almost every other hero in the game. When placing down your turrets you have to always think strategically about it. Some thoughts to go over are “where will this fight lead to?”, “do I need to zone?”, and “will my turrets be able to reach the entire area of the fight?”. In simple terms you need to make sure all your turret radiuses overlap over an area you believe a fight will begin.

As far as laning goes, slowly move your turrets towards the enemy gates after each wave and place on on the topside of the lane and the bottom side in order to avoid enemy AOE clears.

This ability is used only for poking, sniping, and or clearing (unless you have no more abilities to use after a gravobomb). When pushing your lane you can pre fire the wave as it leaves the enemy gate, you can full charge in a bush or even out in lane and poke the enemy hero, or if it is your ONLY ability left to use you can begin to charge this up in a fight and dps the enemy heroes.

Gazlowe’s Xplodium Charge ability synergizes best with his ultimate at level 10 Gravobomb. Xplodium Charge when placed in the right position can be used as a zoning tool or a nasty little trap that your defenseless enemy heroes will walk onto. You can also use this ability to push waves faster and or push structures faster. Make sure to watch your mana when using this ability because it does drain it fast when combined with your passive!

Have you seen this:
Tails of Iron (Review)

This ability is my personal favorite part about Gazlowe! Grav-O-bomb 3000 IS THE BIGGEST GAME CHANGING ABILITY IN THE GAME. Similarly to an ETC moshpit, if you can in a perfect scenario collapse an entire 5 enemy hero team into a Xplodium Charge, you can easily wipe them and take the game back. This ability is why Gazlowe should be feared, simply because it is incredibly powerful as long as you time your Xplodium Charge with it.

Robo-Goblin is a heroic ability you take only in specific situations and circumstances. The only way to abuse Robo-Goblin is on a heavy PVE map such as Cursed Hollow, Blackhearts Bay, and Sky Temple. Notice all these maps also have Bosses on them and sure enough with Robo-Goblin you can solo any boss as long as you abuse your passive to keep your abilities up and allowing turrets to tank part of the damage Another circumstance that would allow Robo-Goblin is when you know your team can either 4v5, or is split pushing and is not looking for a teamfight.

Scrap-o-Matic Smelter: Increases the amount of Mana restored by scrap to 60.

Break it Down!: Scrap now causes Abilities to cooldown three times as fast for 3.07 seconds.

Extra TNT : Xplodium Charge damage increased by 10% per target hit, to a max of 100% increased damage.

Reduce, Reuse, Recycle: Enemy minions that die near you have a 15% chance to drop scrap.

Calldown: Activate to calldown a Mule that repairs Structures, one at a time, near target point for 40 seconds, healing for 100 Health every 1 second. Grants 1 ammo every 3 seconds.

Burning Rage: Deal 10 damage per second to nearby enemies.

Stoneskin (Cooldown of 60 Seconds): Activate to gain 30% of your maximum Health as a Shield for 5 seconds.

Fury of the Storm: Every 5 seconds, your next basic attack will deal an additional 20 damage to the target, and 20 damage to all nearby Minions and Mercenaries.

Hardened Shield (Cooldown of 60 Seconds): Activate to reduce damage taken by 75% for 4 seconds. 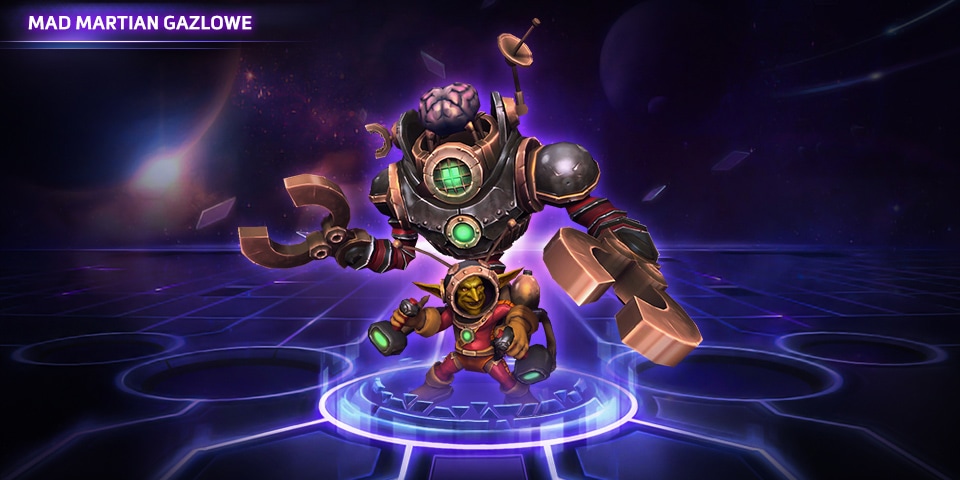 Break it Down!: This ability is overall without a doubt Gazlowe’s best talent. The cooldown reduction is what makes Gazlowe viable because even though he runs out of abilities fast and relies on them, he can constantly be regenerating them.

Reduce, Reuse, Recycle: Because scraps come only via structures and turrets, having the ability to receive at least 1 scrap per wave to reduce your ability cooldowns is worth more than his other talents at level 4. The only other time you would not go this talent is when you are going the death lazor build by which has very little use.

Rock-It! Turret XL: Gazlowe’s turrets do the majority of his damage, and so this talent boosts your DPS by a great majority. The only other option, unless your team drastically needs mule or somehow you can never live due to positioning and you take first aid, is the Engine Gunk talent where you slow enemies. You would take that talent if you need to peel for an ally hero such as SGT. Hammer.

Grav-O-Bomb 3000: 99% of the time you take this talent due to the crowd control and catch it offers capability, unless your team is dead set on avoiding team fights and is focused on pushing and taking objectives then you would take Robo-Goblin.

Turret Storage: Because turrets are your main source of damage, the ability to place 3 turrets instead of 2 increases your damage 33% if you have all 3 charges at the beginning of a fight and they are constantly in range of a target. You should not be close enough to use Burning Rage and the EZ-PZ Dimensional Ripper requires you to have taken the previous lazor talents otherwise Turret Storage provides more pressure. Sprint is your only other option and you would take that talent if you have a very hard time staying alive or you are split pushing with Robo-Goblin.

Kwik Release Charge: This spell in combination with your ultimate can provide up to 5 seconds of CC on as many targets as you catch in your Grav-O-Bomb 3000. If you release your 2nd charge where your previous one was 2 seconds before your first one goes off (at the very least 1 second) and you will have locked down the enemy team and dealt massive damage.

Miniature Black Hole: Unless you took Robo-Goblin level 10, this is the only level 20 talent you will take. You shouldn’t need Hardened Shield if you are positioning correctly and Fury of the Storm does very little for your team in the late game.

The EASIEST way to counter Gazlowe….. are you ready…… kill the turrets. That is all you need to do. Gazlowe’s turrets do the majority of his damage, and if you do not think you can kill his turrets, just fight outside of  their range. They will eat away at your health even if you think you are winning the fight.

Thanks you for taking the time to read this guide =)

I hope with this guide we can bring Gazlowe into the meta!