The Origin of Red Lightsabers Explained in Darth Vader #1

The Marvel Comics Star Wars series of comic books are considered official canon now. So any revelations or plots that are introduced in those pages are now a part of the saga of films that we love. To that end, Darth Vader #1 from Marvel Comics answers a question that many Star Wars fans have had about the origin of Vader’s crimson lightsaber and there is a very Sith explanation for it. 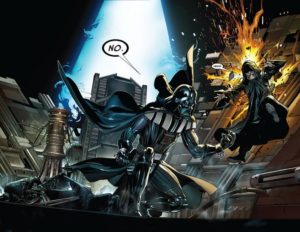 Darth Vader #1, which goes on sale today, was written by Charles Soule with art by Giuseppe Camuncoli, Cam Smith, David Curiel and Joe Caramagna. In the issue, which begins immediately after the events of Star Wars Episode III: Revenge of the Sith, Emperor Palpatine and Vader are overseeing the destruction of lightsabers from the Jedi temple. As the purge continues, Palpatine explains to Vader that the Kyber crystals used to power lightsabers are in their own way alive. In order for a Sith to change the color of the crystal, he must pour his pain into it, torturing the living crystal with it until it becomes the color of his rage. 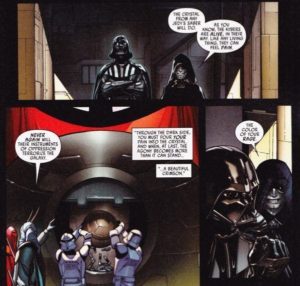 That creepy explanation kind of adds a whole new dimension to the scenes in the movies when you see Vader activate the tortured soul of his lightsaber before a fight.

darth vader Marvel Comics star wars
Are you an Insider?News, reviews, & updates are just the beginning.