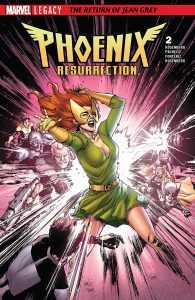 The Phoenix appears in outer space while Jean struggles to sleep, unaware she’s using her telekinetic powers. Young Jean Grey and the other mutant psychics, including Emma Frost and the Stepford Cuckoos, have seemingly gone missing and to top things off, Magneto’s getting involved in the weird events. Just what the hell is going on?!

Things really aren’t looking good for Jean and the X-Men at the moment. With all the psychics missing and Cable injured trying to use the machine, there’s no one left who can use Cerebro. Kitty once again splits the team up to search for the missing psychics and the Phoenix. No one seems to have any luck until Iceman’s team run into Magneto, who behaves really weirdly when battling the team…Cut to Jean and she’s having nightmares of dying on the moon (eek!) as well as seeing things – just what is happening here?! She then serves a familiar spoon bending older gentlemen who disappears into thin air, then mysteriously reappears with a nosebleed. The final panel is a very worrying sight and hopefully signifies the start of some action in the next issue!

The big question is does the second issue actually answer any mysteries from the first issue? Well, unfortunately not, we’re still no closer to finding out the truth behind the weird events, which can prove a little frustrating. The main question though is where/when is Jean? However, this issue does feature a lot of nice throwbacks including the

appearance of Multiple Man and the mention of Dr. MacTaggert, which fans should enjoy. It’s also pretty funny, what 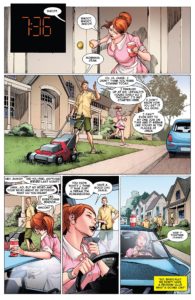 The art from Carlos Pachecoin was pretty solid in this issue, once again we see the X-Men drawn in a very classic way and the fight scene with Magneto is particularly impressive. I also really enjoyed the opening of the issue in space, referencing Jean’s death. What most stands out in this issue though is the panels featuring the Phoenix, the colors used are exquisite!

Phoenix Resurrection #2 furthers the mysteries introduced in the first issue and proved a little confusing if you hadn’t read Jean Grey #10, which explained just what happened to all the psychics. So far I’m enjoying the mini-series; all the little easter eggs are great and seeing the mutants back together is fantastic, but can Rosenberg actually wrap the story up in the next three issues? Fingers crossed!