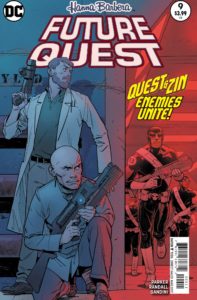 Dr. Benton Quest is forced to team up with his archenemy Dr. Zin and his assistant Jade to narrowly escape a barrage of gunfire. They hold up in a damaged space ship with an injured Jayce, who has been separated from his sister Jan. As the rival scientists get the ship in the air, Jayce recovers long enough to tell them that he needs to find his sister.

Jan, meanwhile, is helping Johnny Quest, Hadji and Buzz repair a damaged and offline Frankenstein Jr. As the kids get Frankie back up and running, they are contacted by The Impossibles who are trying to clear civilians from the 405 as they evacuate an injured Space Ghost.

As another creature rises from the depths of the ocean to destroy the Santa Monica pier, Race Bannon arrives just in time to help take on the beast with the rest of the teams converging. As the battle rages, a new group is on their way: Birdman and the Herculoids. The only question is: Are they there to help or hurt? 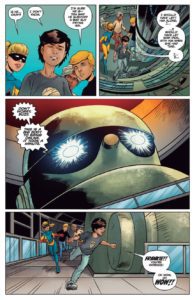 This whole issue hits me right in the childhood feels. Growing up with these characters and thinking about how cool it would be for them to work together hits right at the emotional core of the generation who grew up with these iconic characters.

Jeff Parker has written a story that hits all the nostalgia points without getting repetitive or cheesy. There is a fleshed out, modernity to these characters that doesn’t betray the classic characters that many of grew up with. He’s able to straddle the line between the modern and the classic. Ron Randall’s artwork is effective at giving the characters a more realistic look while also highlighting great action sequences.

The overall story is a slice of nostalgia that draws in the reader, but the depth of the story is what holds your interest. This is a very well done take on some classic characters. Hopefully, they will all have their moments to shine. The artwork is done very well and melds both the classic and modern in a way that makes me want to see what’s next.