Once again, Jack O Lantern returns to wreak havoc on the citizens of Charm City. Teddy and Ron are on the roof enjoying their lunch when the villain descends and they have the exact reaction I have as a viewer whenever I hear him coming: nauseous annoyance. If the producers were trying to get me to hate the character, they succeeded. If they were trying to get me to hate the character because he is overused and ridiculously stupid, then kudos to them as well. I am as annoyed and tired of Jack O’ Lantern as a character as everyone in the city probably is. 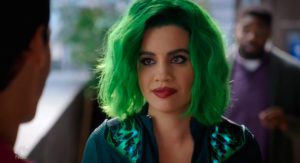 As both men leave the roof, Teddy is accidentally knocked off the roof and rescued by a new hero named Green Fury (Natalie Morales). This is the start of your A plot. Teddy has a date with a new girl that night and now that he’s been saved by the lovely Green Fury, all thoughts of his future date fall out of his head.

Authors Note: Green Fury is a character from DC Comics. It is the original code name of the hero Fire. She was originally Green Fury in the Super Friends comic series before changing the code name when she appeared as a member of the Global Guardians alongside Crimson Fox.

Have you seen this:
Undiscovered Country #10 (REVIEW) 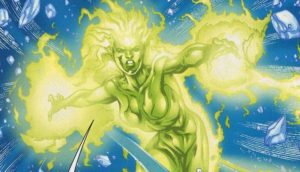 The B plot consists of Emily discovering that she is the only Senior Vice President in the building who does not have an office and is relegated to a cubicle beside the receptionist. Van is, of course, too wrapped up in his own crap to care and dismisses her from his office.

Teddy, Ron and Wendy are lamenting the reality that superheroes do not date regular people. Each stating that the only way that he would ever see her again would be to throw himself off another roof. Emily has decided to take some initiative and annex her own office for a meeting with executives from Gotham. A move that infuriates Van who sees it as a power play to push him out and get Emily closer to Bruce Wayne. When he kicks her out of the office, the war for the office begins with a game of Green Arrow darts. 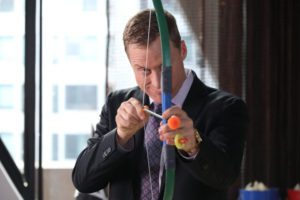 Teddy tries unsuccessfully to get the attention of Green Fury by throwing himself off the roof only to be rescued by The Olympian who notes how disappointed Teddy seems to be in having been rescued. The team confronts Emily as she practices in the conference room and explain to her just how fragile Van Wayne’s ego is complete with flashback and impressive use of goatees. The competition ends in predictable sitcom fashion with everyone seemingly getting exactly what they wanted until Emily decides to deflate Van’s ego once she discovers the depths of his delusion. 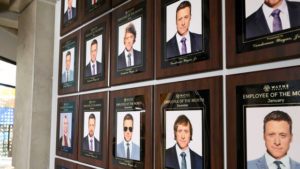 The conclusion of the episode is too fast and too quick to wrap up seemingly complicated character revelations with any kind of satisfaction to the audience. Also, there was no point in this episode where I laughed once. As much as I want this series to succeed, the laughs that are to be had are getting fewer and fewer and there is nothing in this episode that I found interesting enough to move me to watch the next one. If this series wants to move forward and get to a season two, they are running out of time to get it together and the cast is too talented to waste on this level of hackneyed material.