Quick Decisions and their Potential Consequences in The Flash #17 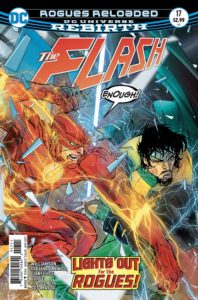 Captain Cold has developed a weapon that has the potential to take down Flash once and for all. His new cold gun has the ability to tap into the Speed Force itself. As both men trade insults back and forth and Flash tries to appeal to Snart’s intellect, he is working on a plan to take down the rogue and his new weapon. Just as he starts to get the upper hand, the remaining rogues decide to attack.

What should have been a simple plan that would have seen the rogues escape from Central City and the Flash forever starts to go downhill quickly as they collectively can’t seem to let go of their hatred for Flash and their desire to beat him. Flash uses this information to press the advantage and make a final bid to take them down so they can’t hurt anyone else. The resolution comes in the form of Golden Glider and her desire to forgo the code that the Rogues have held for so long and to finally end the threat of the Flash altogether. A decision that has dire consequences for everyone involved. 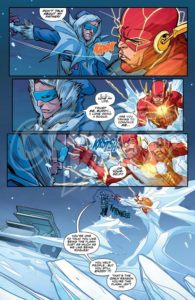 Meanwhile, there is a mysterious break in at Iron Heights and someone has accessed data from the warden’s office. It turns out that the thief was Kid Flash who retrieves the information that he was looking for, but might regret what he finds as he heads to Belle Reve to confront someone more dangerous that all the rogues combined. Wally may have made it out of Iron Heights just in time as a new boss of Central City’s crime has emerged.

I really like the end of this arc. Joshua Williamson closes out this particular story very well and sets up the new conflicts and threats that both Barry and Wally will face going forward in a way that makes me curious. It’s always gratifying to see Captain Cold be the criminal genius that he was meant to be and it is going to be interesting to see how that progresses going forward. Wally is playing the wild card in this issue. His motives are unclear and there is the potential for his intervention to cause more harm than good. The artwork is consistent throughout with some really inspired angles during the splash pages and a continued motion effect on the characters.