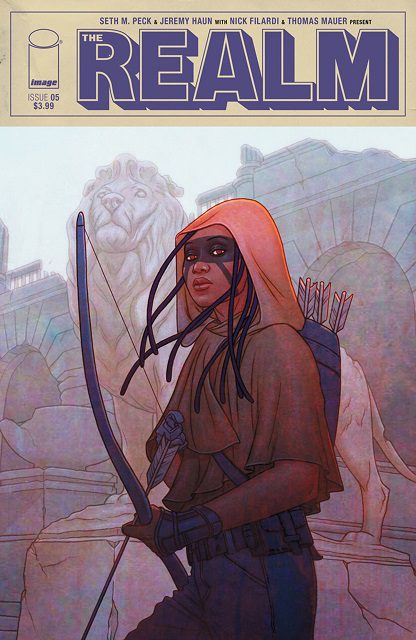 The orcs have tracked down Dr. Burke and are on the attack. Will and his group must do anything they can to fend them off and save the sanctuary.

I’ll say this one time and one time only, The Realm is everything that the Netflix film Bright should have been. A dark modern epic fantasy that doesn’t shy away from its fairy tale roots. Comparing it to a bad movie does it no justice though. The comic series is bound to be on everyone’s radar soon enough with all the gore and interesting characters. This issue featured nonstop action and some weird looking creatures. The artwork is a nice middle ground between realism and stylized. Some of the character designs are just downright awesome. The comic also has a cinematic feel without resorting to a heavy use of splash pages, it’s really been an impressive read.

This series does have excellent world-building but frustrating character development. I can barely remember anyone’s name and they’re already bringing on more main characters and finding new places and people to meet. I’ve dealt with this in the first season of Game of Thrones but at least the show allowed the story to breathe a little before rushing through and gave us time to know each member of the cast. I would have liked to have known Burke and David and little more before the big reveal. I expect things to slow down eventually, and each issue has been exciting.

The Realm #5 setup to have an epic battle between orcs and humans, and it delivered. Rook is the designated badass and they continue to live up to it. Though that Orc slayer is giving them a run for their money. The Realm is a series to watch out for, it’s getting bigger and more exciting with each issue.