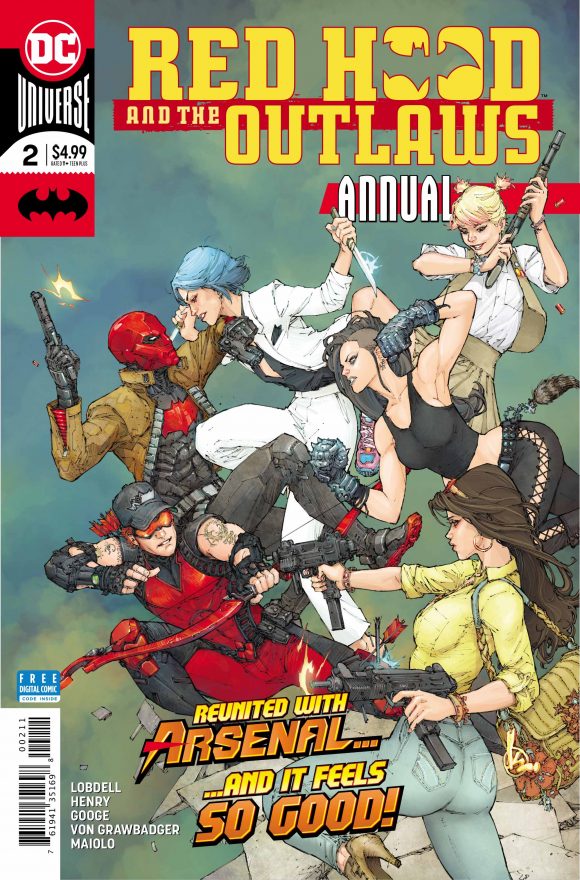 It’s so nice to have Red Hood and Arsenal back together again, even if it’s brief.

As much as the Jason Todd-Artemis dynamic had grown into something special, the Jason-Roy Harper bond will always be the perfect marriage of misfits. I say that because (I hope) everyone has a friend like Jason does Roy, and vice versa, where next to nothing could affect their friendship.

Time. Distance. New relationships. Family feuds. Relapses. Nothing has changed how these two feel about one another. Sure, they have doubts about one another’s feelings – in this case, it’s Roy who thinks he’s disappointed Jason – but that’s a result of the rejection they’ve received from others over the years.

Sometimes you need a reminder there’s at least one person who will always have your back.

By focusing on that relationship, Scott Lobdell gave both characters a chance to reset. While Roy heads off to rehab, Jason can continue Roy’s research on the Underlife.

But I do like the direction Lobdell is going with Red Hood. A major crime consortium (as Arsenal put it) is the right villain for him while he flies solo.

We also got a peek at where Artemis and Bizarro’s status. (Lobdell wrote that section, with art by Neil Googe, colors by Marcelo Maiolo and letters by Taylor Esposito.) I’d rather see these two get a mini-series than devote 50 percent of the ensuing Red Hood issue to them. That probably won’t happen. Maybe just devote one issue to Artemis and Bizarro when they finally find their way back to Jason? I could get on board with that.

Have you seen this:
Bliss # 3 (REVIEW)
Artemis Bizarro comics DC comics red hood and arsenal Red Hood and the Outlaws