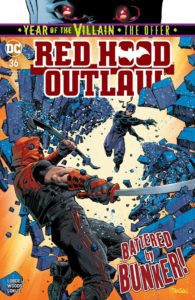 Scott Lobdell managed to pack so much into one issue, it’s hard to know where to start with Red Hood: Outlaw #36.

Let’s begin with Bunker. This guy needs to get over himself. Look, I’m not saying it was normal to keep Penguin captive like Red Hood did, but really, what’s normal for these people? Either way, his reaction to Jason Todd’s accusations about Penguin was ridiculous. “Am I supposed to take the word of a proven liar?” Here’s an idea for Bunker: if you don’t believe Jason, ask pretty much everyone else. They’ll tell you Jason’s right about Penguin.

Speaking of Penguin, I can’t believe Red Hood never planned to kill him back in issue #24. I understand it’s fact, not an opinion, but I truly thought that was Red Hood reverting back to his old ways — which are a big part of why I was first drawn to the character.

While that was a bit disappointing, the reveal of Wingman’s identity outstanding. There are still so many questions that need answering, but knowing Willis Todd is out there, fight crimes and has interacted with his son is about as awesome a twist as you can come up with. Did not see that coming at all.

Lastly, Lex Luthor is about to give Red Hood a wild proposition. I cannot wait to see what he does with it and what his decision means for the character going forward.

Regarding the art, I like Jason Todd’s look right now. I’m not talking about Red Hood. Jason has the businessman look down. Regarding his outfit, Peter Woods’ rendition of the original Red Hood outfit is good, but not for me. I stand by his and Lobdell’s decision to change the character’s look with the shift in artists as much as I did when the change was first announced.