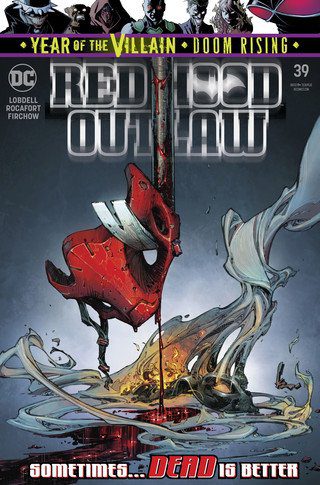 Professor Red Hood didn’t start off great, but Red Hood: Outlaw #39 finally got things moving in the right direction. The previous two issues were concerning, but this one got the Red Hood story back on track.

Additionally, Kenneth Rocafort continues to draw Red Hood better. There were some inconsistencies when he took over in Red Hood: Outlaw #36, specifically when Jason Todd was massless. With the mask on, though, Rocafort dominates the new-look Red Hood.

But the colors are still a bit too much for a Red Hood story. He’s dark. Can’t have everything around him being so bright.

If Red Hood readers were on the brink of giving up after Red Hood Outlaw #38, fear not, Scott Lobdell and Rocafort have things under control.

The image of Red Hood after he shot Monster arm is one of my favorite images of him. Take all of his students out of the background and a solid color behind him or a brick wall and that’s a post that perfectly represents everything Red Hood. Jason was in peak form this issue.

Another great, but simple, panel was where he’s leaned against the wall, cleaning his gun while the kids fight. Everyone is out there fighting for their lives and he’s going to do his thing to make a point.

The reason Red Hood: Outlaw #39 was so much better than the previous two where Jason served as a teacher was we got more Red Hood and a normal mix of his students. Now, I get it, Lobdell had to establish these characters first. But, ultimately, we’re reading Red Hood: Outlaw for, well Red Hood. Unless it’s any of his outlaw buddies — the Dark Trinity Outlaws or the original Outlaws — no one else should be chewing up the pages.

Speaking of the Dark Trinity Outlaws, looks like we may have a reunion on our hands soon. Just in time for a gigantic catastrophe.