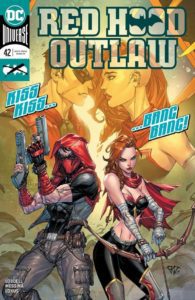 If you’ve been close to giving up on Red Hood: Outlaw or were waiting for a good time to hop back in, Red Hood: Outlaw #42 seems like a good time. Paolo Pantalena and Arif Prianto are coming in right when there’s another shift in the story — and it seems Scott Lobdell is back on track.

First, the elephant in the room: Artemis and Red Hood’s feelings.

Artemis’ joke about her hair was great and the nine-panel grid where we see her console Jason over Roy was heavy. But the kiss was, of course, was the most important part of Red Hood: Outlaw #42.

When she dropped the “it was like kissing my brother” line, my jaw dropped. We all saw what happened when they first kissed way back. It’s clear throughout all of Red Hood: Outlaw #42 they both want to try to kiss again, but couldn’t take the leap until the very end. Jason put it best at the end: they both lied, and that’s OK.

There’s no need to rush things with these two. Let them fight alongside each other and just be a team, with Bizarro, for a while. Allow Red Hood: Outlaw to be a kick-ass title again.

Lobdell has planted the seed for at least four stories going forward: the love story of Artemis and Red Hood, retrieving Mistress, helping Suzie Su with whatever she’s about to deal with and then there’s that panhandler talking about salvation. Looks like some of the kids might be hanging around with Bizarro a bit, too.