Red Hood and the Outlaws #12 Review 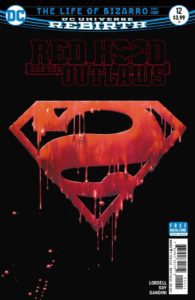 Bizzaro has collapsed and is slowly deteriorating due to his cloned Kryptonian DNA. Also, a mysterious man has unleashed Solomon Grundy onto a Gotham City fair.

What a fantastic run this has been for Scott Lobdell, Dexter Soy, and the rest of the creative team. Just when you think this series is going slow up, it comes out with this emotional and heroic issue featured around Bizarro of all people. There have been great issues so far, but this is definitely one of my favorites.

A mysterious man had broken Solomon Grundy out of Arkham Asylum and asked him to unleash his brand of terror on Gotham City. It’s tough to tell who exactly this guy is because they don’t show his face and his clothes look so disheveled. I’m hoping whoever he is, he becomes the big bad of the series because that’s something this series needs after it introduces us to each Outlaw. Red Hood and the Outlaws rally does feel like the adult Young Justice to me, so an overarching villain would be great. 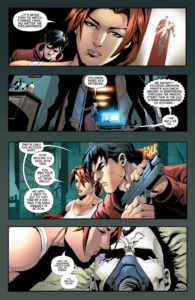 There are so many versions of Bizarro now that it’s tough to make us care about this particular one but they have found a way to do it. We got to see he Outlaws friendship grow very quickly, enough so that Bizarro’s sacrifice to save his friends from Grundy was sad. All the touching moments felt earned, and that’s a credit to this creative team. This super group of misfits has endeared themselves to readers very quickly. I really like what they have done to Bizarro and the ending of this issue makes me feel like they’re going to bring the character full circle.

As great as the story has been, Dexter Soy’s art has matched it the whole way through. His issues are always perfect, and I really want to see him go on and get huge gigs soon. He deserves a Batman and Justice League book, or anything he wants. The art, as well as the coloring, has been exactly what I would want from this series. It’s a great looking comic book, and the other artists in the series rotation have been no slouches either.

This issue centered around Bizzaro’s heroic sacrifice and it was a great read. The Outlaws are a team you love to root for, so I don’t think they’ll rip away one of the team members just yet. This series continues to go strong, with only a few hiccups along the way.