Red Hood and the Outlaws #14 Review 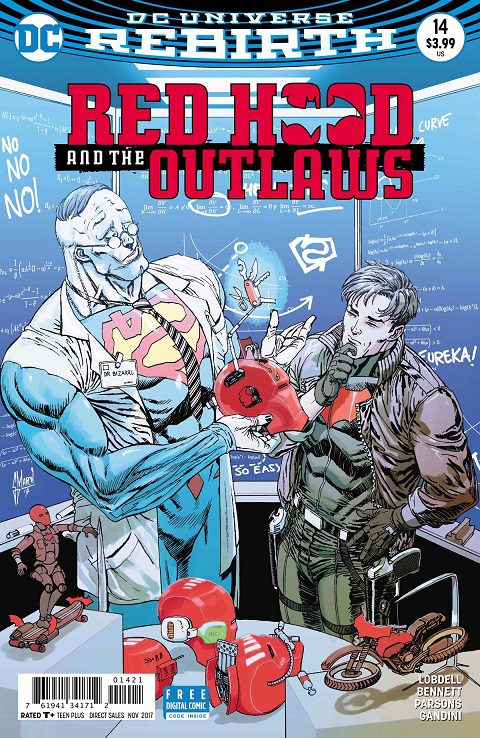 An excellent issue #13 saw Bizarro dying and Lex Luthor step into save him and imbue him with kryptonite to save him. By doing so, Bizarro’s brain was jump started to the same super degree as his strength. This hyper-intelligent Bizarro is front and center in Scott Lobdell’s current issue. Lobdell gives Bizarro’s character a new dimension as the genius of the team and it plays out like a bright “what if” version of Red Hood and the Outlaws.

If Bizarro was a Kryptonian genius, what could he invent? A hidden headquarters? New weapons and tools that out think Batman? Wormhole doorways to the Fortress of Solitude? Lobdell’s Bizarro constructed all of those and more in one morning. Bizarro’s new brain power appears to set the team on a new path and Jason Todd comments on how he finally feels like he is making a difference in preventing crime. In multiple panels, Jason thanks Bizarro for all he is creating before the reader gets a glimpse that these inventions may not last long.

In spite of the hopeful tone, there are looming issues on the horizon for the team. Bizarro’s intelligence has caused him to start predicting crime. This precognitive threat 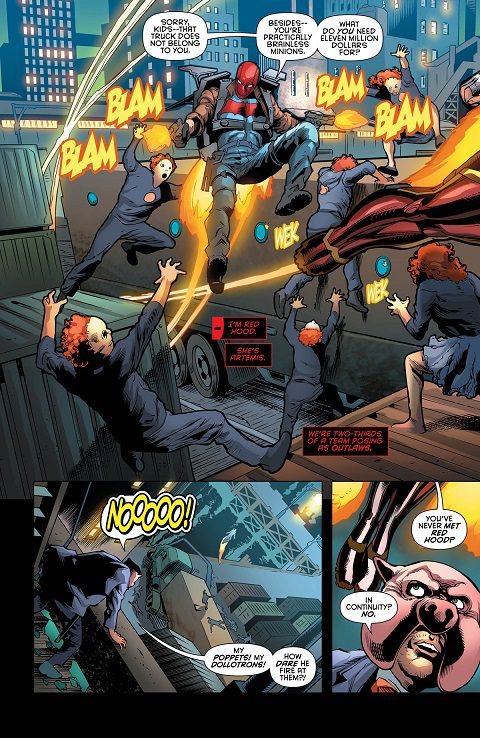 prevention is covered in a variety of media already, but it is possible that Lobdell has a different angle. Jason Todd’s history as Red Hood demonstrates that he was willing to take extreme actions to stop crime. This angle could provide a moral gray area to explore. Alternatively, with Jason so excited, Lobdell has suggested that Bizarro may be attaching his value as a team member and a person with his intelligence. Bizarro not feeling valued would be meaningful for the team to grapple with over the long term.

The artist team of Dexter Soy and Veronica Gandini rotate off for this issue and leave the pencils and inks to Joe Bennett and Sean Parsons. Soy’s attention to detail and Gandini’s dark shades are missing here for this “what if” issue, but the artistic change works with the tone of this issue. The lighter, more hopeful Outlaws are depicted in a brighter style than before. There is a symbolic use of light throughout the issue any time one of the team members is present. Bennett and Parsons light and hopeful tone matches perfectly with the story direction. The return of Soy and Gandini’s mean dark shadows will creep back in.

Issue #14 plays out like a “what if” alternative for the Outlaws, with a team filled with success and hope. The darker realities of the team are kept at the edges for now, but the creative team has constructed new opportunities for character growth for issues to come.