Red Hood and the Outlaws #15 Review 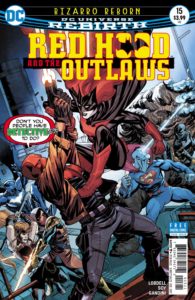 The Outlaws’ new headquarters still hovers above Gotham City, but it has finally caught the attention of the Bat-Family. Batwoman, Azrael, Clayface, Batwing, and Cassandra Cain make their move to take down the genius Bizarro.

This series continues to exceed expectations, and the genius Bizarro storyline has been a load of fun. Having a fortress that hovers over Gotham City was bound to attract someone, and as we learn, later on, that may have been the point. As someone that is reading Detective Comics, the Bat-Family come off very aggressive in this issue, but the battle their aggression leads to is fantastic. It’s clear Bizzaro is up to something and that Jason Todd is still the odd man out when it comes to his fellow Batman allies. There were a lot of characters to play with here and I thought Scott Lobdell did a great job of giving everyone time to shine and while staying true to who they are. 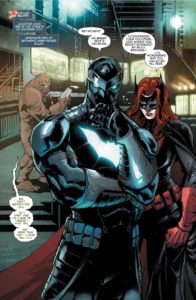 Bizarro isn’t the only genius here because artist Dexter Soy does some great work. Make no mistake, I love the art team on Detective Comics, but the Bat-Family has never looked better. Even Batwing looked all kinds of awesome. He was simply mean looking, it was great. The action scenes in this series are always over the top and amazing. The colors seem to match the same tone they have going on in Tec, so there was a nice blend.

This issue was basically Bizarro wanting to lose it and give in to his old self. He’s also shown shades of being deceitful, which may come back to bite him in the butt. I love what they’re doing with his character, and I love what they’re doing with Red Hood and the Outlaws. There were some minor inconsistencies with certain team members characteristics, but it didn’t stop this issue from being a great read.