Red Hood and the Outlaws #17 Review 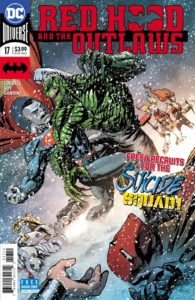 Red Hood and the Outlaws team up with the Suicide Squad to save the world from an unstable hideout for Harvest.

Scott Lobdell continues, what is perhaps his best DC comic book run ever, by touching upon his greatest hits in the universe. Not only does this issue’s storyline center around the evil organization Harvest that kidnapped young metahumans in Lobdell’s Teen Titans run, but we also get more Killer Croc and Jason Todd bonding. That friendship was formed in the first run of Red Hood and the Outlaws, when Croc ended a fight with Todd because he noticed the young former Robin wasn’t putting up a fight and just wanted to die. Though I wasn’t a big fan of the first volume of this series, that moment stuck out and thanks to this Task Force X crossover, it was revisited in this issue. Lobdell makes an argument to take over Suicide Squad, he clearly knows how to write morally gray characters that still feel like villains despite doing good things.

Bizarro reminds me of “Genius Patrick” from the Sponge Bob SquarePants episode where the normally dumb character has his intellect boosted. I doubt this story arc was inspired by that episode but it is similar, and very enjoyable. He is smart but also conniving, which makes his every action in this issue suspect, like when he randomly disappears for a few pages. 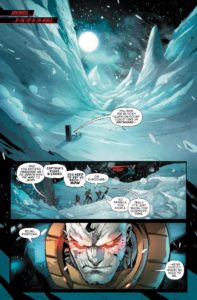 Dexter Soy continues to produce superb art in this series. The best part about the current story arc, is that all the crossovers allow Soy to draw a plethora of characters from the DC Universe. He more often then not outdoes the visiting characters normal artists. He deserves to be on Batman, or at least Detective Comics. Though Soy seems very happy on his social media accounts. He always promotes Red Hood and even posts his favorite Jason Todd cosplays, as well as doodles. He’s a passionate artist, and it shows in his work.

I keep waiting for this series to fall off even for a moment and it doesn’t. Red Hood and the Outlaws really has been one of the most consistent books since Rebirth. Bizzaro has been an absolute star, and this current storyline has showcased him better than any other. The back and forth between the Outlaws and Task Force X in this issue was spot on. If you’re not reading this comic yet, then get on it-wonderful writing, great action, and always funny.