Red Hood and the Outlaws #20 Review 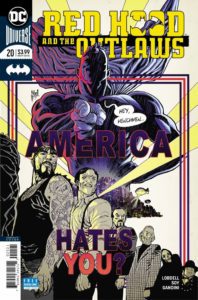 Red Hood and the Outlaws #20 gives us a dive into the criminal network while Jason and Artemis continue to investigate Bizarro’s recent behavior. One of the funniest things about superhero worlds is wondering how all these villains are able to pick up a whole new crew so often. Well, with a touch of modern technology, we see that the henchmen’s have their own social network group. When we get a page where they’re all gathered together like they’re at some sort of job convention. There’s even a sense of camaraderie among them. Sharing stories and experiences from different villain heads such as Two-Face and Mr. Freeze. We’re even treated to a light story on one of these men who just can’t seem to get out of the game and is always making an excuse to go back. His reasoning is relatable in a sense, but it’s really just a guy that seems to be afraid and doesn’t believe he can be successful outside of being a criminal. 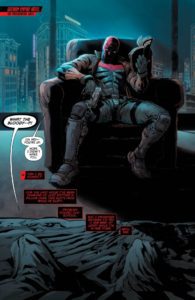 Meanwhile, with our lovely opposite trinity, tensions are rising around Bizarro. One of the best things about Artemis is how she’s not afraid to hold back her words. This is the case of not only being worried about herself and Jason, but she’s worried about her friend here. These are the kind of moments many have had when it comes to their friends and family. You know something is off but they’re just not sharing it. These conversations can be tough because one side doesn’t want to budge but you know this is all for the better because you’re caring about that persons well being. Bizarro right now is essentially like an addict that’s hiding his drug use from his friends and lately, his paranoia is getting worse as he continues to try and hide what he has been doing. Things aren’t all bad with Bizarro here though. Lately, he’s been off the field but this time around he decides to go handle a large group of criminals on his own, just without the knowledge of Jason and Artemis. The encounter gives Bizarro an awakening and you can see that there is still a great large part of him that is good.

Have you seen this:
Detective Comics #1026 (Review)

This issue may have been one of my favorites from its art team. Nothing truly extravagant happens here in the sense of some type of epic splash page. It’s mainly the facial expressions we have in this issue. From smiles to anger, sadness, and worry, it really brings out the characters to feel more real. Scott Lobdell and his team here have truly done something great with these characters in this run and hopefully, we don’t see this team fall apart anytime soon.