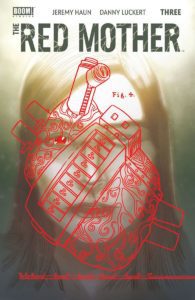 In the horror film The Conjuring, Elizabeth Warren speaks about the nature of possessions and hauntings.  The first stage, Infestation, is when the entity is making their presence known into the life of the intended victim.  The activities are so small and often sporadic it is easy to explain them away. Red Mother # 3 provides such a role in this horror series.  While the issue does well in performing this unenviable task it still suffers the usual problems of this portion of similar possession stories.

It is during this time that the protagonist can run the risk of explaining all the activity away, setting themselves up for the horrors yet to come. Life seems to go back to normal.  They are able to go to work, have a night out with friends or maybe they finally get some uninterrupted and much-needed sleep.

That is where Issue # 3 finds Daisy – everything is okay.  She has researched and rationalized all she has experienced and chalked it up to the trauma and her implant.  So upon examining the contents of the package, she is unbothered and calm. Instead of a threat, the puzzle box or “heart” arriving unexplained seemingly is what the doctor ordered.  How was this gift connected to what Daisy was experiencing? 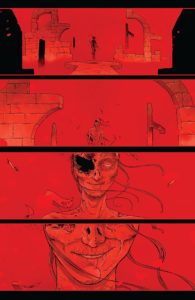 Daisy spends much of the evening and the issue attempting to solve the puzzle. The previous two issues saw Daisy interacting with other people as well as encountering quite a few visual scares. Now in her apartment alone, she is meant to be seen as vulnerable.  When nothing nefarious happens Daisy can confidently put the recent visions behind her - life is getting back to normal. This is why I stated this issue has an unenviable task.  Asking the reader to remember they are in a horror story when nothing scary is happening.

It is with a subtlety that Illustrator Danny Luckert keeps the horror flowing through this book.  Utilizing a full spectrum of bright and beautiful colors, the artwork mirrors Daisy’s emotional state during this issue, normalcy.   It is only when I took notice of the instances of the color red that I was reminded of the unknown menace lurking in this tale. I felt that even in this “normal” issue I was being reminded to pay attention or that I had missed something, some sort of crimson “jump scare”.  It is during these panels that you can feel the tension being raised, keeping in tone with the genre. With each new instance of red, I discovered whether it was the ladies’ room, the picture in the doctor’s office I could feel Red Mother’s presence, even if Daisy wasn’t willing to acknowledge it.

Red Mother # 3 isn’t immediately scary nor does it provide much in terms of storyline. If Red Mother was a film Issue # 3 would serve to slow down the pace and build the tension.  It is during this time in a horror story the main character becomes more humanized, hence the puzzle sequence. When nothing happened during this sequence I felt cheated. This is often the case in horror movies.  Since it took up such a large portion of the issue that made it worse. Truly Jeremy Haun has much in store for Daisy as he reveals more to her visions of Red Mother and Luke’s disappearance. Both plots are ignored to allow Daisy to make peace with her new normal.  And while normal is good it doesn’t make for good horror.