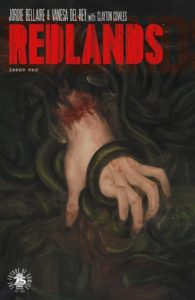 Three witches lay waste to a police station in an old-fashioned town in Florida.

By the time I finished this first issue of Redlands, I was ashamed at the lack of horror comic books I’m currently reading. The story kicks off in the middle of the action with a police station under siege. Readers are thrown into this exciting supernatural story while not knowing what is going on. Unfortunately, it ends with readers still not exactly knowing what is going on.

This whole issue felt like an opening of a Supernatural episode, which is one of my favorite television shows. It introduces readers to a world that is occupied by a murderous coven of witches. The police they attack are portrayed as awful humans, but the way the witches slaughter these men doesn’t leave you cheering for either side. There’s a good chance that the main protagonist will be introduced in the next chapter, which is a surprising way to launch a series; unless the series focuses on the three witches, which would be great, but as a reader, I never got my bearings. Despite the lack of main character to focus on, it was still creepy and exciting. 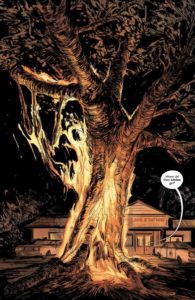 Full disclosure: I’m a huge Vanesa R. Del Rey fan. Her Instagram is filled amazing art that doesn’t get nearly enough exposure and she’s done a wide range of different type of comic books. I always thought a detective or noir comic was more befitting her style, but after Redlands, it’s clear she was meant to work in horror. Every series she does has a dark and classic look to it, and since this is a supernatural story that takes place in 1977 it is a perfect fit. Her characters exhibit so much emotion in a single panel, and the heavy use of shadows made the whole read through creepy and compelling. A lot of credit goes to Jordie Bellaire for the coloring. I like the story she’s writing but I loved the colors in this issue. Standouts for me was the burning tree that popped out of the black background and the whole police station which sequences which were typically monotone. This was a beautiful issue overall.

To be perfectly honest, it feels too early in the story to give a true review and score. All I know is that there are three powerful witches that are wrecking havoc on a small town in Florida in the year 1977. Also, Vanesa R. Del Rey’s art is gorgeous and Jordie Bellaire’s story and color work did leave me wanting more.