Return of the Protégé in Green Arrow 18 Review 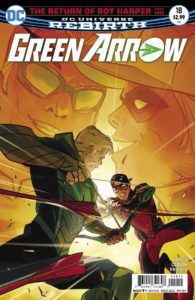 A flashback scene at the Emerald City Mall showse Roy Harper AKA the future Speedy and Arsenal, bumping into a younger Oliver Queen to sneakfully pickpocket him. It’s late; the mall is closing soon. It seems as though Roy Harper has this game figured out. He pickpockets peoples’ wallets and waits for the mall to close; circumvents the mall’s CCTVs; and just hangs out there after hours doing whatever he wants. He is enjoying himself in the sporting goods store shooting arrows, Oliver jumps out of nowhere and confronts him. Oliver tells him to keep his cash, but wants his wallet back. Impressed by how he was able to get past the mall security he invites him over to his apartment and the two hangout all night eating Oliver’s cooking and playing videogames. The two get to know each other and Roy stumbles upon Oliver’s secret lair where he finds out he is Green Arrow. Oliver hires him to provide tech support for when they go out on missions, but Roy criticizes how the arrows are ridiculous. The scene goes to the present where Roy goes to Spokane, WA to see his brother Bird. These two have some issues to work out.

The issue delves into the subplot of the Cascade Pipeline which runs through Spokane, WA where Roy Harper is shown in flashback scenes to either confront or make 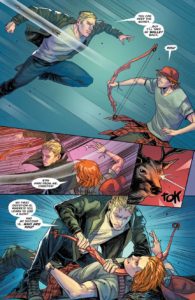 up with a brother. There are protesters from the Wild Dog group faction, most definitely taken their namesake from Wild Dog himself. There is foreshadowing in the cover, in the subtitle, and towards the end of the issue that Green Arrow and Arsenal are going to throw down and have a drag out brawl.

I think this issue is a fantastic read with huge potential for a new story arc. It is coherent and it stays away from some of the clichéd expressions I’ve been seeing lately. The plot wasn’t predictable I wasn’t expecting the story to jump from past to present as often as it did, and even though we got a lot of back and forth it didn’t affect the flow of the plot. There is a lot of resentment built up it seems by Roy against Oliver that isn’t clearly spelled out other than that of a surrogate father telling him what to do or the nitpicking during the battle scene over the arrow selections. Green Arrow continues to impress me since the beginning of Rebirth. The art is crisp and clear as Eleonora Carlini and Arif Prianto create detailed landscapes, buildings, people, vehicles, and equipment.

The scene at Roy’s cabin in Spokane is beautifully detailed where the night’s sky looks so incredibly real and the tint on the Jeeps windows brings the vehicle to commercial realism. The page with the sun setting behind the cabin and old swing set is rendered with careful consideration for the perfect use of colors. It’s going to be very interesting to see where Benjamin Percy takes things next with Green Arrow. He’s coming off the last story arc which saw Green Arrow trying to avenge the death of Chief Westberg by confronting Malcolm Merlyn. This new arc with Roy Harper as friend or foe is going to be very interesting to see where the writer takes things next. I cannot wait to read Green Arrow #18!