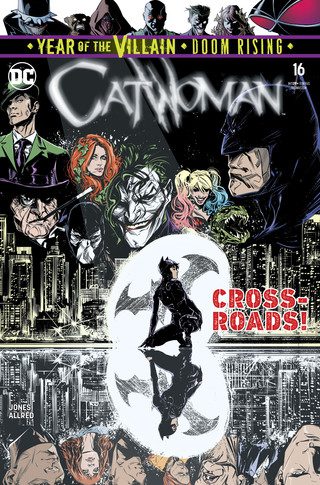 If there is a better match for an artist and a series than Joelle Jones and Catwoman I would sure like to see it. This pairing of creator and title can not be beat. Jones in her short time has become one of the most influential artists to work on DC’s feline fatale. Her name belongs alongside other famed Catwoman artists like Jim Balent, Adam Hughes, and the late, great Darwyn Cooke.

Jones has made this title her own and when she has stepped away from the art chores in recent months the book noticeably suffered. I can’t remember an artist that has had the same impact on this title within the last five years…no offense to anyone that has worked on this series in that time, but Jones stands above the crowd by a sheer command of the character and knowing how to maximize the use of Selina.

This issue is split between Salina crashing a children’s birthday party to get information and a startling near-death sequence just outside of a Lazarus pit. I’ll spoil part of the ending because the comic ends on a cliffhanger, but we watch as a battered and beaten Catwoman wades into the depth of the pit… what happens next is anyone guess.

If I had to summarize Jones’ Catwoman to a new reader in just a couple of words, I say that this take on ‘The Cat” would be attitude and style. Every page Jones shows how to make a comic page pop. The layouts are second to none, the use of anatomy and facial expressions are expert, there are only a few weak spots in the title when Jones is at the healm and those are so minor that they do not detract from the enjoyment of the book.

Those weakness are an overuse of inks on shadows that make some panels appear messy; An overuse of silhouettes; And finally a tendency to draw Salina with the same sly smile…not that the last one is really a complaint but more of an observation in this issue. Jones is fortunate that her unique style go a long way towards covering up this minor nitpicks.

The rest of the creative team do their part to make sure that Jones’ artwork gains the right amount of shine, although I will say that there are some interesting color choices being made by Allred that push the boundaries. Laura is not shy about adding bold colors to clothing and common items in panels, some are so strong that the book takes on a pop art feel that Warhol would have gushed over. Again, not a complaint, but another observation.

This title is blazing its own trail and with Catwoman’s recent storyline with the on again off again romance of Batman I’m sure that there are a number of new readers that are checking this title out; many for the first time. What a treat to have waiting for them! A solid offering from a character defining artist.