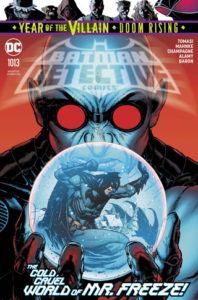 Batman wants answers and those answers will lead him to Freeze’s latest plan.

After getting the information that he needs from one of the kidnappers who have been taking women who share traits with Nora Friese, Batman and Alfred head back to the cave to prepare for what’s coming next.

Batman’s preparation will include donning a new suit designed specifically to deal with Mr. Freeze. When he locates the villain’s hideout, the resulting confrontation will pit the Dark Knight against the animated horrors that Freeze has butchered in his attempts to cure his wife.

Freeze and Nora go on the run with Batman in hot pursuit. His attempt to rescue the kidnapped women will ultimately lead to Freeze making a breakthrough with his frozen bride.

Tomasi ends this issue on an unexpected and intriguing note. The final page is a shock that has the potential to change everything about the character of Mr. Freeze. The dialogue is well done and the story moves at a pace that kept me interested and engaged. I really enjoyed how this story unfolded and was really impressed.

The art by Doug Mahnke is fantastic. I love the details in the characters and the panels. The design of Batman’s Freeze suit is amazing and I love how this story visually captures the action and adventure of the story.