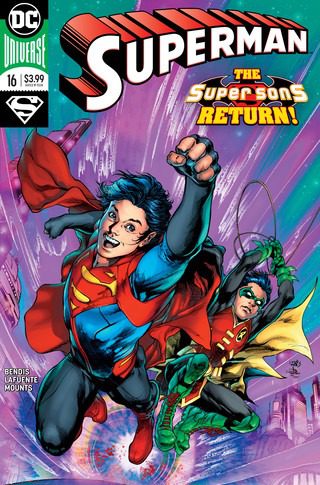 In the midst of the Leviathan story line Brian Michael Bendis has time to stop and bring readers one of the best buddy moments of the year involving the Super Sons; aka Damien Wayne as Robin and Jonathan Kent as Superboy. Now I have to be honest and upfront Super Sons was a guilty pleasure for me. It was one of those comics that was just plain fun to read and it always found its way onto my pull list. So having Bendis take on the duo in a story that amounts to an epilogue…well this was going to be a guilty pleasure minus the guilt.

What we are left with by the end of this issue is a tear stained farewell that takes Jon into the future to be part of the Legion of Superheros and leaves Damien to carry on the fight alone. This wasn’t a tie-in into the current DC Leviathan stories that have taken over the Superman titles this summer, while the clandestine agency makes an appearance they are not the focus, only background players as the two young heroes reconnect as Jon has been away for three weeks in our time, he has been gone for years in his own time. Kent is now a teenager and Damien doesn’t take the news well that his friend has gone through puberty before him, is now taller, and well has more life experience.

More from GWW
Discover the Destiny of the DC Universe!

The two quickly patch things up and remind us all why they are one of the most endearing duos in recent memory. Under all the training, the super heroics, the fantastical adventures these two are just a couple of kids who are best friends. Which makes the parting of these two towards the end of the issue all the more bitter-sweet.

Bendis does what he always does and handles the humanity of the characters like a maestro and finds the right heart strings and plays a warming concerto on them. Not only are we left catching ALL the feels as Daimen and Jon part ways, but then Bendis goes one further and has a nice father/son moment with Clark and Jon that might leave some readers needing a tissue. DAMN you Bendis! Who broke in here and put these tears on my cheeks?

The artwork was masterfully handled by Lafuente, Mounts, Sharpe. The trio captured the youthful feel of the previous series that fans have come to expect. The design of the characters were on point, the scenes were colorful and popped right off the page and their take on the Super Sons had me hoping that perhaps DC could put this trio together again on a future project featuring the youngest Bat/Supes duo.

More from GWW
Deep Diving Into the Brain: The Signifier Review

This comic was a fond farewell for the young pair of crime fighters. I’m sure it’s not a goodbye, but more of a so long for now situation. There are a lot of worse ways to spend your four dollars, at least here you are getting your money’s worth and then some by getting an amazing story, cool art, and a few tears. DAMMIT! Who keeps putting these things on my cheeks?!?