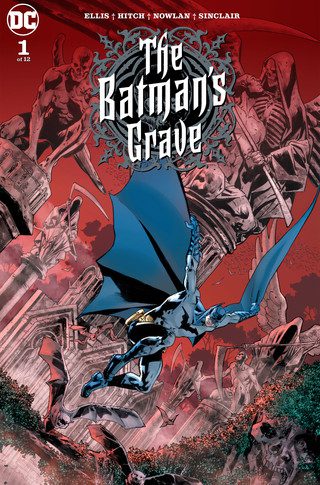 DC Comics once tried to bring together the top talent of the comics industry to work on their flagship characters and started what would become the All-Star imprint. The All-Star line would have some hits like All-Star Superman, written by Grant Morrison and drawn by Frank Quitely and some misses, namely the head-scratching Frank Miller and Jim Lee run on All-Star Batman & Robin, the Boy Wonder. By the time the imprint was scrapped it had only produced three titles.

I bring up this failed brand for a reason. DC should have went into their vault, dusted off the imprint, and proudly pasted it on the front of this comic, because The Batman’s Grave is all-star talent from top to bottom. This! This is what an ALL-STAR comic should have been!

This is one of the best Batman books I have read this year and that is a high bar to clear with Tom King and his wonderful run on the regular series, as well as numerous issues of Detective Comics that have given Dark Knight fans plenty to enjoy over the last 365 days. But this initial issue might stand above them all. This is how you “do” Batman.
Ellis is no stranger to weaving together a great comic narrative. He plays the long game, creates rich multi-layered worlds, and doesn’t shy away from taking the time to invest in enriching his characters. The first issue of this twelve issue run not only sets the table for what fans can expect in this series, but it then takes that table, knocks it over, folds that same table up, and power bombs your expectations through it. Ellis has done something in this first installment that I didn’t think was possible, he took us further into the thought process and mental skills of Batman than anyone else. He shows us why Bruce Wayne is the World’s Greatest Detective.

There is a murder in the slums of Gotham, a seemingly nondescript homicide of a former district attorney, William Stannick. As Batman scopes out the crime scene we get walked through Bruce’s process. Interviewing witnesses and neighbors; Scanning the room with fancy imaging technology, taking mental notes of the smallest details; returning to the Batcave and beginning the real detective work… and it’s here in just a few pages that Ellis takes Bat-Fans deeper into the psychological make-up of Bruce Wayne than perhaps any other creator has ever taken the audience before. Bruce becomes the victim.

To watch the methodical process that Bruce puts himself through to identify with the deceased is haunting. We watch as piece by piece the personality of Bruce/Batman fades away; Bruce imagines himself into the crime; envisioning himself in the victim’s clothing, taking the pose of the dead body, immersing himself so deep in the crime scene that Batman ends up envisioning himself as the decaying corpse.

This sequence is so detailed and mesmerizing to watch that we forget about the heroics of the Caped Crusader, we forget that this man is part of the Justice League and has stood toe to toe with Darkseid. All the fantastical elements of a man in a bat costume go out the window and we are left watching a savant working their magic; piecing together the parts of a puzzle that no one else cares about. But it is Bruce’s obsession, his meticulous drive that pushes him to solve the death of a social cast-off. There are no small deaths in Batman’s mind. Every life carries weight.

Ellis even brings the psychosis of Bruce’s childhood into the mix as Bruce explains to an exacerbated Alfred, that he never places himself in the mind of the killer, he can only see the crime through the eyes of the victim. It’s right there that Ellis sums up Batman in one simple exchange. That is sheer brilliance in a scene that is almost played out as an unimportant aside. That worldview is what sets the Batman mythos apart from every other hero.

There are story elements in just this first issue that are perfection. The series title of The Batman’s Grave is underscored by the opening of the book as we start with narration, not from Bruce, but from Alfred, as he tends the Wayne mansion gardens where Thomas and Martha Wayne’s graves are placed. Next to the plots of the deceased Waynes is a headstone marked for Bruce. A grave awaiting an occupant that Alfred worries will be filled all too soon if Bruce doesn’t walk away from his one man war. Alfred’s tone in this first issue is not the traditional man-servant, but more of a worried and tired caretaker who has given up hope of saving a man who is committed to his demons and no longer wants to be saved.

As steeped in subtext and emotion as the story is, the art is superb. Hitch has never once failed to deliver his trademark style and this comic is no different. The attention to detail, the dynamic action, the picturesque panel and page layout. Hitch’s artwork is divine in this tale and the comic becomes transcendent thanks to the visuals. This is not a comic book but a portal giving readers a glimpse into a rain soaked Gotham and the legendary figure that roams its skyline. If you are not familiar with Hitch’s art prepare to fall in love; if you are familiar prepare to fall in love again.

While it would be easy to just give credit to this pair of virtuosos that would be an unforgivable dis-service to the other tremendous artisans that assisted in crafting this tale. Nowlan, Sinclair and Starkings have all become synonymous with greatness in their various comic book specialties. There is no weakness in any one part of this comic. It may be as close to modern superhero perfection as I have seen in a long, long time.

Nowlan gives Hitch’s art tremendous depth and edge. Every panel a meticulously designed enhancement. The inks are never overdone, over powering, or dirty. This comic should be an example to others in the field in how to perform your job to the highest level.

Sinclair has been a master of color for years now, but in these pages he takes Gotham and breathes life into what is normally a grim and gritty city-scape and turned the downtown skyscrapers into a cornucopia of color that reflects the image of Times Square. Gotham is a bustling hub of tourists and a big city life. Meanwhile, the dark alleys feel damp and haunted; the crime scene is cast in a muted light that is so on point with the story that you can almost smell the rotting corpse in the room. While Ellis and Hitch may have build the body of this story it is Sinclair that breathed life into it.

What is there left to say about Richard Starkings? The man has become an institution in comics based on his lettering skills. There is simply NO ONE that does it better. From caption and balloon placement, to text usage, to sound effects it all reads so smooth it would make the purest silk envious.

As a comic book reviewer I get exposed to every title that the major publishers release every week. It is easy to become numb. There are times when all the releases seem to blur together. But this stood out like a neon sign in the middle of a forgotten stretch of highway. It can not be ignored.

I will go so far as to say that this is a series that Bat fans will not only flock to, but return to again and again in the coming years, and if this first issue is any indication than we as a comic book reading community are watching a masterwork being crafted before our very eyes.

I fully and whole heartedly give this book my highest recommendation and also give it my rarest of endorsements by giving it a perfect score. This is a MUST for every batman fan out there, but also a MUST for every comic book fan as well.

I must also include one last note here in closing. The ending of this issue is so creepy, and so twisted that it will sit with you long after the book is closed. Don’t be afraid to admit that you were upset by this reveal. It is how this book was designed. I might even suggest not reading this comic in a lonely room or an empty house…the creaks in the floorboards may terrify.