Rick and Morty vs DandD #4 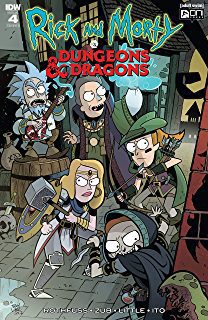 Rick and Morty vs. Dungeons and Dragons #4: Reap the Whirlwind
IDW

Wow, I missed a lot in this series - three whole issues! But being the smarty I am (just kidding, all the context clues where there), I figured out what this series was about.

From the tons of context clues, the family was placed in a dimension where the reality is basically a game of… wait for it… Dungeons and Dragons. Everyone was able to fulfill a role where they weren’t the characters we all know and love. Jerry was, believe it or not, the leader of the group and was actually listened to. Summer was a badass, Beth was a healer - which is something she can’t do to herself, and Morty wasn’t as much of a coward. Rick, however, was still himself, which made him the weakest character in the bunch. After fulfilling their quest, the Dungeon Master (AKA the being who sent them there), brought them back home.

Have you seen this:
Is Gearing Up in WoW Worth It?

From what I could gather, Morty wanted to learn how to play D&D so he could play with a girl. Sounds fair enough. However, thrilled with the adventure, Summer began writing her own D&D campaign. Seeing Rick depressed after it all - seeing as he was still his same old self - plays with him, as “sometimes it’s nice to take a break from who you really are.”

Moral of the story: Rick needs a break from himself.

This was a great issue/ storyline. It was interesting to see the characters in new lights. Sadly, I caught this story at it’s tail end, but that doesn’t mean I loved it any less. In fact, I hope to track down the prior three issues, and I hope you do the same!