Rime is a puzzle adventure game where you are a boy washed up on an island. The game was brought over on other consoles and pc back in May this year. Now that is on the switch, we wonder how does this port compare to the other platforms? When you awake on the island you are implored on exploring the island to discover a way to move forward. You’re able to run, jump, climb, roll, and drag blocks when needing to solve puzzles. However, one of the main mechanics is yelling at objects to activate flying lights of orbs to open a door or to break a vase. The game does a great job leading you where you need to for immediate progression such as lights on object that’ll lead to a new puzzle or a little fox that will show where to go from time to time. The look of the game is fantastic with bright colors that are striking to the eyes. With different locations such as the tropical beaches of the island, or a desert to an underwater cave. Rime doesn’t keep anywhere long enough to where you grow tired of the place. For as big as each area seems to be. Once you explore enough, you begin to see how small these areas actually are. As you progress through the game you’ll find collectible items such as toys and keyholes when looking through will reveal past memories of the boy. You also begin to question what this island is as you discover bit by bit on how you ended up there. Controlling your character feels good for the most part. Jumping always feels right and anytime you forget what button does what, a prompt will show up to remind you what action you can take whether its to grab an object or to lower yourself to climb down a wall. I never found myself to blame the games controls if I were to miss a jump or fall off a cliff. The games mechanics are very simple and they always work. Another standout in the games is the soundtrack.   The soft melodies really help keep the atmosphere relaxing and only pick up during some dark moments in the game and really amplify when coming to culminating moments at certain segments of the game. Sadly there is one major downfall in this port.   It just doesn’t run great on the Switch. Throughout the game I would constantly deal with frame rate drops, even during cut scenes. This issue is persistent whether the console is docked or not. When docked the games visuals look clean but when undocked, they look worst. Everything looks fuzzy with the main character seemingly to take the worst hit. This is hard to really be ok with for this is the first game I ever played on my Switch where the game looked this bad in handheld mode versus docked. The game is quite frankly not optimized well enough as I dealt with looking at a fuzzy screen with bad frame rate drops. 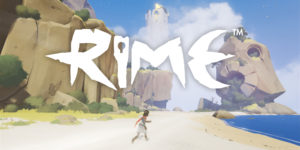 Rime is a fantastic game that unfortunately is better off being played on something else until the developers at Tequila Works find a way to have the game stabilized and able to run at a more solid and consistent frame rate. If you have other ways to play this game, I highly recommend it. If the Switch is your only option, I would wait until you hear about updates that fix the current issue that keeps a game from being truly as great as it is.